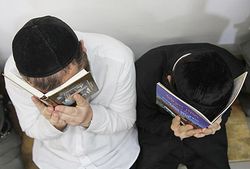 Three days after his arrest, the Jerusalem District Prosecution filed an indictment again Ben Ish Chai Yeshiva head Menachem Edri, who allegedly shot and wounded one of his students following an argument. Edri's friend, 30-year-old Yitzhak Zohar of Jerusalem, was also charged with assisting the Yeshiva head in the act.

According to the indictment, Edri served as rabbi at the Jerusalem yeshiva, despite his never being ordained to the rabbinate. In January, Edri fought with one of his students, 23-year-old Eliyahu Liberty, after learning from one of the students that he was involved in criminal activity.

Following their altercation, Edri ordered Liberty to leave the yeshiva immediately. A day later, before Shabbat, Liberty arrived at the Yeshiva with his friends, and attacked the student who informed Edri of his past.

Before Shabbat, the "rabbi" contacted Liberty's girlfriend and demanded she convince him to stop his violent behavior, and threatened that if he fails to do so "he will end up in the hospital".

After Shabbat, Edri phoned the student and asked him to come in for a meeting. Once Liberty arrived at the meeting, Edri took out his gun. The student began to flee, and the "rabbi" and his friend, Yitzhak Zohar, chased after him. Edri fired at Liberty's leg.

The indictment states that Liberty sustained two bullet wounds to his foot and fell to the ground. The "rabbi" then approached the student and began to beat him with the gun, while continuing to threaten him. Edri and Zohar then fled the scene.

Threats and money in exchange for silence
According to the indictment, as a result of Edri and Zohar's actions, Liberty's foot was shattered and the student suffered multiple fractures, and was hospitalized.

But that was not the end of the "rabbi's" violent behavior. After the incident, Edri allegedly called the student and ordered him to keep quiet about the incident, and in return paid Liberty and his family large sums of money and testified on the student's behalf in a trial being held against him.

Edri's attorney, Yaron Gigi said after the indictment was filed, "It is too soon to judge the rabbi. We maintain that he is innocent, he is a peaceful man, who follows the Torah and not criminal involvement. We believe in the justice system and we will prove his innocence."

Attorney Oren Biton, who represents Edri's friend, Yitzhak Zohar, told Ynet, "As far as my client is concerned, his innocence will be proven quickly during the trial – with hopes that he will be released to his home as soon as possible."

Attorney Shlomit Ben-Yitzhak, of the Jerusalem District Prosecution said, "The indictment points to pronounced patterns of criminal behavior, including commissioning an ambush for the student and chasing him in the streets with a motorcycle and gunshots using his friend. In addition, the rabbi threatened the student, and later used various means to ensure his silence."

Edri and Zohar were charged with conspiring to commit a crime, aggravated battery, possession of weapons, firing in a residential area and malicious damage.

Menachem Edri charged with conspiring to commit crime, aggravated battery, possession of weapons.
Failed messiah was established and run in 2004 by Mr. Shmarya (Scott)Rosenberg. The site was acquired by Diversified Holdings, Feb 2016.