Rabbi offered to bet on the stock market for the gambler, but allegedly bet far more money than the gambler authorized – and lost all of it.

Here's how the British papers reported the alleged scam:

…The rabbi, Simon Nissim, offered to place spread bets for Andrew Feldman on the Dow Jones index and give him any winnings.

But Mr Feldman, 22, who agreed to cover any losses and ended up with a bill for £140,000, is now asking deputy High Court judge Richard Snowden QC to set aside a statutory demand for the money served on him by the 34-year-old rabbi.

Jonathan Lewis representing Mr Feldman at the High Court in London, said the two used to be friends and his client "looked up to and placed trust" in the rabbi.

He said the two had agreed or understood that all wins would go to Mr Feldman and he would indemnify Mr Nissim for all losses.

But while Mr Nissim placed bets for Mr Feldman during two weeks in October 2008, he also placed a "considerable number of spread bets on his own behalf using the same spread betting account", said Mr Lewis.

Mr Feldman, from Bushey, had argued that he did not accept that all the bets had been placed on his behalf and that he had never authorised the "huge volume" of bets. He said he had agreed to four or five bets a session but Mr Nissim had placed 77 bets in a four-hour period which he had never instructed him to do.…

Here is an excerpt of a page from the Jerusalem Kollel's website showing Rabbi Nissim as a then-current employee of Aish HaTorah's London branch: 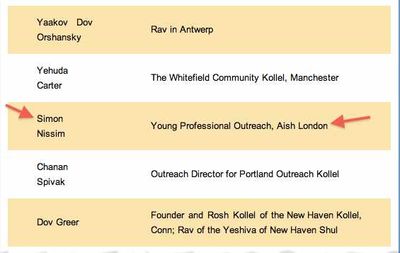 Here's the entire page as a PDF file:

I know the head of the Jerusalem Kollel, Rabbi Yitzchak Berkowitz. He's a straight shooter and a good man.

Unfortunately, it seems not all his students are cut from the same cloth as their teacher.

Posted at 02:40 AM in Crime, Litigation, etc., Haredim, Outreach | Permalink

Rabbi offered to bet on the stock market for the gambler, but allegedly bet far more money than the gambler authorized – and lost all of it.