A new advertisement has managed to offend both ultra-Orthodox and National Religious because it makes use of a picture of the Western Wall. 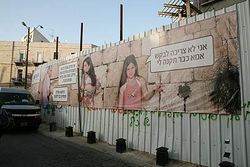 A new advertisement of the Mashbir Lazarchan department store has managed to offend the ultra-Orthodox and national religious sector in Israel as it makes use of a picture of the Western Wall.

A huge ad was hung recently on the fence of a compound in Jerusalem where the new Mashbir Lazarchan structure is being built. The ad shows three members of the cast of Israeli sitcom "Ramzor" on the backdrop of the holy site.

Residents belonging to the religious and haredi sectors were angered by the ad, claiming that it showed disrespect to the Jewish people's holiest site.

"We don't have many places that are under consensus, and turning them into ads for a commercial company and trying to use them to make a few more shekels is unnecessary. There are sacred values and the Western Wall is one of them. They should be left beyond the limits of commerce and cynicism of the advertising world," said Jerusalem resident Haim Rosen.

Western Wall Rabbi Shmuel Rabinovich said that the Western Wall is a place which connects between all parts of the Jewish people and "should not be used as a commercial tool, neither in favor nor against anything."

Sources in the rabbi's office said they expected the company to remove the ad as soon as possible.

New Mashbir Lazarchan's VP Markering Odelia Orbach said in response, "We had no intention of angering the haredi public. On the contrary, this was done out of a desire to connect to the values we all share."

A new advertisement has managed to offend both ultra-Orthodox and National Religious because it makes use of a picture of the Western Wall.
Failed messiah was established and run in 2004 by Mr. Shmarya (Scott)Rosenberg. The site was acquired by Diversified Holdings, Feb 2016.