Livni Urges Likud And Kadima To Join Forces Against Haredim

Opposition leader MK Tzipi Livni (Kadima ) on Thursday called to combine the forces of "the two large Zionist parties in Israel" to reach a peace agreement with the Palestinians and bring about a social shift. 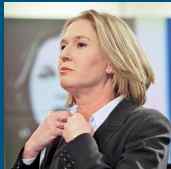 Opposition leader MK Tzipi Livni (Kadima ) on Thursday called to combine the forces of "the two large Zionist parties in Israel" - Kadima and Likud - to reach a peace agreement with the Palestinians and bring about a social shift.

"The prime minister is the one preventing the change," Livni said in an interview with Haaretz. "The parties he called 'our natural partners' before the elections are his means of preventing the change. There is no connection between what they represent and the Zionist vision. Neither the one [Theodor] Herzl outlined nor [Ze'ev] Jabotinsky, whose civic doctrine they have cast aside."

After the elections last year Livni met Netanyahu, who told her "the right-wing bloc won," she said. "I told him, there's another option, combining the two large parties' forces to advance peace [with the Palestinians] and internal agendas."

"Israel 2010 is a country in which women ride in the back of the bus, dry bones take precedence over saving lives, conversion is a mission impossible, the Zionist vision has blurred and defining the Jewish state has been given to a monopoly of ultra-Orthodox politicians that are taking advantage of the system and politicians. Society is divided into cloistered groups, each studying in its language - Hebrew, Arabic, Yiddish - the curriculum it sees fit," she said.

The public's attention has focused on the ultra-Orthodox community and core curriculum in recent days, Livni said, "and rightly so. We must act now, before the situation turns into mutual hatred that will bring no solution. Change is possible and the keys to change are in the hands of the Zionist parties representing the majority in Israel."

The change must consist of three co-dependent elements - education, military or national service and work, she said.

"The core curriculum is necessary from two aspects - creating a common basis reflecting Israel's values as a democratic Jewish state. Judaism and civic studies [must be taught] in every school. The second is providing every student with tools to join the labor force in the future and make a decent living. This is the only interpretation of equality - equal opportunity to students and a fairer distribution of the burden among the population. This, with joint values and vision, are critical to our existence as a society. Pluralism is not a substitute but complementary."

Livni said the state must cut off funding immediately for schools that don't teach core curriculum.

"Change is possible, but it will not be done with the agreement of the ultra-Orthodox parties. They have no reason [to agree], as long as Likud is the ruling party. Likud has bound its political destiny and all Israelis' fate to the ultra-Orthodox politicians' whims," she said.

"Kadima in my leadership refused to mortgage its world view. True, Kadima governments paid in the past. In my leadership it won't do so any more," Livni said.

Had Likud not dealt with the ultra-Orthodox, the two large Zionist parties could change the collision course Israel is on, both on the domestic and international fronts, she said. We could turn to a democratic Jewish-Zionist track, which protects individual rights in a democracy and creates a national common basis for the Jewish state, she said.

"The two parties could change the system of government to reduce the extortion power of the small parties, condition education funding on teaching the core curriculum and encourage anyone who can to join the labor force. They could also reach a peace agreement with the Palestinians based on two states. This is the only way to preserve the Jewish democratic identity," she said.

The peace goals and social goals are not contradictory, she said.

"In the past people used to say it was a matter of priorities, that it was worth paying and giving up [certain goals] to do the really important things, like a peace agreement. But this government is paying so that it won't have to reach an agreement. We can't wait and mend society only after we win all the battles. Otherwise it will be too late," she said.

Livni Urges Likud And Kadima To Join Forces Against Haredim

Opposition leader MK Tzipi Livni (Kadima ) on Thursday called to combine the forces of "the two large Zionist parties in Israel" to reach a peace agreement with the Palestinians and bring about a social shift.
Failed messiah was established and run in 2004 by Mr. Shmarya (Scott)Rosenberg. The site was acquired by Diversified Holdings, Feb 2016.