Letter from Jerusalem: Why The Most Radical Anti-Zionist Haredi Sect Isn't Really Different From Other Haredim

Was the most radical of Neturei Karta extremists really all that different?
It was the Zionists who sold out and allowed Moshe Hirsch's rivals in the Haredi world to realize his vision.
By Anshel Pfeffer • Ha'aretz 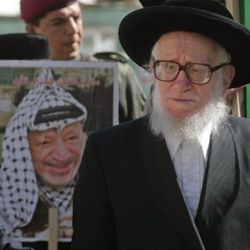 The funeral procession for Moshe Hirsch this week, from Mea Shearim in Jerusalem to the Mount of Olives, was unremarkable - a couple hundred black-garbed men desultorily following the stretcher carrying his tallit-shrouded body and the requisite eulogies in Yiddish and heavily-accented Hebrew.

One ultra-Orthodox Web site wrote that "masses of Jerusalem's sons accompanied him on his final journey" but it was nothing more than what any other elderly Haredi gentleman would have received for his last rites. The self-styled Haredi "foreign minister" was put to rest with little fanfare, a far cry from the funeral less than three months ago of Menahem Porush, the former Knesset member and Haredi elder statesmen, which was attended by tens of thousands, including all the leading rabbis and many secular politicians including President Shimon Peres.

But Moshe Hirsch would have not have had it otherwise. The radical opponent of the heretical Zionist state remained in his final days totally estranged from any acceptance of Israeli sovereignty. In the schismatic world of Haredi politics, his faction of Neturei Karta (Aramaic for "guardians of the city" ) was the tiniest and furthest splinter outside the pale.

During his long public career, he saw almost every group within the Haredi camp succumb to some degree of cooperation with the the ritually impure state, whether by carrying blue identity cards, participating in the elections, accepting funding for yeshivas and schools from the government and National Insurance benefits or working with the police in identifying bodies of terror victims. Even the most insular and rigid Haredi sects sold out and received some form of the state's embrace.

Hirsch and a small group estimated at no more than a hundred or so families held out. Their women even traveled abroad or stayed in their homes to give birth, ensuring that the newborn would not be registered as an Israeli citizen.

If Hirsch and the hardest core of his followers had just quietly and passively held out against the state, we would have never heard of them. But he felt that it was his duty to protest, to shout to the world that the Zionist regime was a blasphemous institute, a rebellion against God and therefore a true Jew had to support any entity dedicated to ending its hegemony in the holy land.

It began with public prayers in Jerusalem for the victory of the Arab armies in the Six Day and Yom Kippur wars. Then came regular visits to Yasser Arafat, first in his Tunis exile, later on in Ramallah. In recent years, as Hirsch lost his ability to travel, his younger acolytes became favored guests in Tehran.

At any large pro-Palestinian demonstration in New York, London or Paris, you can see them, three or four men prominently standing in their bekishe robes and shtreimels, making sure the TV cameras catch them.

For Iranian President Mamoud Ahmadinejad they serve as useful idiots, allowing him to claim that he is not an anti-Semite, but from Hirsch's point of view, he was simply putting his point across: "Real" Jews do not support Israel.

He was ostracized by the great majority of the ultra-Orthodox, even the officially anti-Zionist Eda Haredit and other factions of Neturei Karta condemned his followers' meetings with Ahmadinejad.

In the mid-90s when an unknown assailant on a Mea Shearim street splashed acid in his face, causing him to lose one of his eyes, it was widely assumed to have been an inside-community job.

His death was not noted in any of the "official" ultra-Orthodox newspapers this week. A leading Haredi journalist mocked the secular Israeli media this week for their ignorance in "portraying a totally marginal man as if he was a central figure," and at least in numbers of followers, you certainly could not have found a more marginal leader than Hirsch. But was he really so divorced from the Haredi mainstream?

The Neturei Karta anthem includes these lines - "We don't believe in the regime of the heretics, and we do not care for their laws, we will go through fire and water on the path of the Torah." Are these sentiments so different from the ideology of the recognized Haredi leadership?

The great majority of the ultra-Orthodox community takes part in the political process and votes, on orders of the rabbis, for its representatives in the Knesset. Over a hundred thousand students study in yeshivas funded by the state to the tune of over a billion shekels, but this does not mean that they have accepted the state's laws and authority.

Tel-Aviv Mayor Ron Huldai called this week upon the secular sector in Israel to rebel against the political arrangements which allows and finances the existence of a state-funded education system with no state control and which does not equip its children with the necessary skills for leading productive lives in the 21st century.

Ultra-Orthodox spokesmen hit back, claiming that their yeshivas, unlike secular schools, instill real Jewish values in their students and that violence and drugs are unknown there.

"The Talmud trains the brain" they say, and a young man brought up on ancient Aramaic texts can learn a trade in a matter of months if need be.

What they did not say this week, (but they certainly do in internal Haredi publications ) is that the greatest achievement of the ultra-Orthodox community in 62 years of Israel's existence has been not only to get the state to pay for their education system, but to also ensure that their schools remain virtually free from any government intervention and inspection.

"The pure education" has remained just that, unadulterated and unchanged, no foreign or modern influences allowed. Laws requiring them to teach Hebrew, English, mathematics and a smattering of science and history remain unheeded. The political clout of the Haredi parties ensure that there are no sanctions and the state funds continue to flow.

Through the schools, the rabbis control also the parents and their children's futures, bringing up another generation that believe they have no real allegiance or responsibility to a secular state. Hirsch accused them of selling out to the state but he was wrong. Menachem Porush may have been his bitter enemy but they were both working to achieve the same aims. It was the Zionists who sold out and allowed Hirsch's rivals in the Haredi world to realize his vision.

Letter from Jerusalem: Why The Most Radical Anti-Zionist Haredi Sect Isn't Really Different From Other Haredim

It was the Zionists who sold out and allowed Neturei Karta's rivals in the haredi world to realize Neturei Karta's vision.
Failed messiah was established and run in 2004 by Mr. Shmarya (Scott)Rosenberg. The site was acquired by Diversified Holdings, Feb 2016.