"They are arresting righteous Yeshiva students for protesting the desecration of graves," said Rabbi Yitzhak Tuvia Weiss, the leader of the Haredi group that organized the protest. "It is they [the police] who should be arrested."

Some 700 Haredim riot in Jerusalem after graves removed from Ashkelon ER site
Jerusalem cuts off services to Haredi neighborhoods due to violent protests; at least 30 arrested in last two days.
By Liel Kyzer, Yair Ettinger and Nir Hasson • Ha'aretz 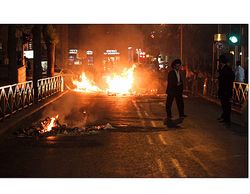 The Jerusalem municipality on Sunday evening cut off services to a number of ultra-Orthodox neighborhoods, after hundreds of protesters clashed with police during demonstrations against the state's decision to relocate ancient remains buried at the site of a planned emergency room in Ashkelon.

Close to 700 Haredim took part in the Sunday demonstration in Jerusalem's Shabbat Square organized by the Eda Haredit sect, the extreme ultra-Orthodox faction that has been most vocal in its objection to the relocation of the human remains in Ashkelon.

Several municipal employees in the capital were beaten on Sunday by angry Haredi demonstrators, and ultra-Orthodox youth staged riots along Bar-Ilan Street. Authorities arrested at least 30 Haredi protesters in the city. 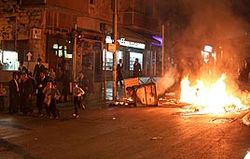 Due to "a long list of violent incidents, including attacks on municipal workers and the vandalism of city facilities at the hands of the Haredi protesters, the city has decided to remove employees from these neighborhoods and immediately halt all activities until the violence and lack of concern for human life and property ends," said the municipality.

"They are arresting righteous Yeshiva students for protesting the desecration of graves," said Rabbi Yitzhak Tuvia Weiss, the leader of the Haredi group that organized the protest. "It is they [the police] who should be arrested."

The controversial plan has sparked outrage among Israel's ultra-Orthodox community, as it views the removal of buried remains as sacrilege.

The Israel Antiquities Authority on Sunday said preliminary findings from the excavation at the site of the planned emergency room reveal that the ancient remains buried there are not in fact Jewish, but from the Byzantine era.

Several demonstrators set fire to garbage bins, and traffic to and from the square was blocked. Shortly after the protest began, dozens of ultra-Orthodox youth also descended on Bar-Ilan Street and began hurling stones and bottles. They burned garbage bins in the middle of the road to block traffic and strewed debris and garbage throughout the street.

A large police force, including mounted officers, dispersed the crowd using water cannons. Three of the rioters were arrested and taken into custody. 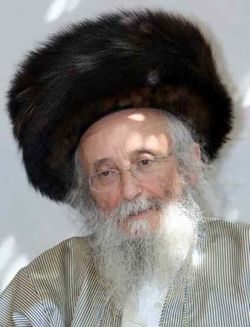 Rabbi Yitzhak Tuvia Weiss, the leader of the Eda Haredit, charged, "They are arresting righteous yeshiva students who are protesting the desecration of graves. It is they [the police] who ought to be put in prison."

"Only risking lives will enable us to stop the desecration," added Rabbi David Shmidel, the head of Atra Kadisha, an organization dedicated to preserving Jewish places of burial. "We will fight even if they dig up the graves of soldiers and other Jews."

Prime Minister Benjamin Netanyahu also said Sunday said that the government's decision to construct the bombproof emergency room at Barzilai Medical Center is in the public's best interest, despite opposition from the ultra-Orthodox community.

"After the Second Lebanon War, we made a decision to erect a new emergency room next to Barzilai Medical Center," said Netanyahu at the weekly cabinet meeting on Sunday. "There is an important ultra-Orthodox public that is offended by this. We reached a decision to implement [the plan] and the general public's interest is the
deciding factor."

Deputy Education Minister Meir Porush on Sunday visited the medical center to register his opposition to the project, calling the excavations an "embarrassment and a disgrace".

"It was possible to find alternatives to digging up graves that may be Jewish," Porush said. "It would have been preferable to have found a compromise."

Netanyahu had refused permission for a preliminary check to ascertain that the graves were not Jewish, Porush said. In response to Porush's comments, the head of the Ashkelon municipal council, Benny Vaknin, said: "The real shame is with the people who delayed construction of the bombproof emergency room, while during Operation Cast Lead people could have died…That is the biggest disgrace."

"They are arresting righteous Yeshiva students for protesting the desecration of graves," said Rabbi Yitzhak Tuvia Weiss, the leader of the Haredi group that organized the protest. "It is they [the police] who should be arrested."
Failed messiah was established and run in 2004 by Mr. Shmarya (Scott)Rosenberg. The site was acquired by Diversified Holdings, Feb 2016.