Senior ultra-Orthodox officials criticize leaders of struggle against removal of graves from Ashkelon hospital, following Jerusalem Municipality's decision to halt service to haredi neighborhoods. 'They've made us lose our power of deterrence,' one of them says. 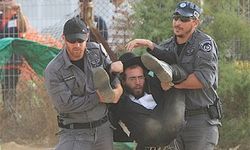 After a day of riots following the removal of graves from the Barzilai Medical Center in Ashkelon, which ended with a Jerusalem Municipality decision to halt service to the capital's haredi neighborhoods, the ultra-Orthodox on Sunday night attempted to reduce the tensions and pointed a finger at the leaders of the struggle.

During Sunday's demonstrations at the Shabbat Square and on Bar-Ilan Street, haredim hurled stones and glass bottles at the road and set fire to trash dumpsters. One of the stones hit a police officer in the head.

The protests began in the morning hours in Ashkelon, where 47 people were arrested throughout the day. Another 40 haredim were arrested near Jaffa's Andromeda Hill. In the evening, the riots spread to Jerusalem, where several municipality workers were attacked. As a result, the municipality ordered its workers to leave all the haredi neighborhoods "till the danger has passed," according to Mayor Nir Barkat.

"The extreme protestors are definitely causing damage," Knesset Member Uri Maklev (United Torah Judaism) told Ynet. "They are dragging people to the margins and are unable to tell right from wrong. We are living in a democratic country and every person has the right to protest, but we are against rioting and any type of violence."

Maklev added that haredi public was hurt by the decision to relocate the graves in Ashkelon. "The graves of our biblical fathers are crying out from the ground, the damage is alive and kicking. We think a reckless and irresponsible decision was made, aimed at serving personal interests and showing that the prime minister is determined."

According to the MK, the rabbis did not call on the public to protest and those suffering from the police's conduct were the residents on the streets.

'Police thought it was Gush Katif'
Yehuda Meshi-Zahav, director of the ZAKA humanitarian voluntary organization and the former operations officer of the Eda Haredit faction, said that "the battle for the graves was not lost today – it was lost at Intel."

Meshi-Zahav, who was once in charge of the haredi sector's greatest battles, said that a minority of dozens of young people were running the protests and damaging the haredi power of deterrence.

"It's anarchy with them. They don't care about anyone and claim to lead the haredi public. It's like a 'crying wolf' story. You can't threaten everyone with a world war," he stated.

"At Karta and Safra (parking lots) and Intel, the protests were conducted by a number of bored hooligan children. At the moment, the haredim have lost their power of deterrence and will remember what happened over the past week for a long time," Meshi-Zahav argued, adding that there was a great amount of internal criticism within the sector.

He also criticized the police: "If this is how the police system treats more serious things too, it's bad. They sent 700 policemen to the haredi neighborhood as if it were Gush Katif. This is the joke of the week, they have no idea."

A senior haredi journalist also spoke about a disagreement among the haredim. "The protestors are fanatic and mad extremists. We are talking about a few hundreds of people, who are leading to a generalization of the entire haredi public. If they hadn't existed, the incitement against us would drop by 50%. I know haredim who are afraid of walking on the street because of the incitement against the haredim."

Doctor: Day ended peacefully
Although Deputy Health Minister Yakov Litzman has forbidden them to give interviews, one of the doctors at the Barzilai Medical Center related a little about what the medical team had undergone on Sunday.

"From our point of view, work and life went on as normal," the doctor said about the first (and probably the last) day of relocation of the graves in the Ashkelon hospital premises. "We were concerned that there would be violence, but it wasn't like that. In the end, it went peacefully.

"Due to guidance and security, there was almost no physical contact between us and the demonstrators," he continued. "Here and there the haredim flung a curse at someone walking by. If tens of thousands of demonstrators had come, it may have looked completely different. The government decision to build in the original pace was a victory for common sense. Any other decision would have been stupid. We hope that the continuation of the construction will be as planned, because this hospital has suffered (the lack of the premises) for many years."

Officials at the police national headquarters said on Sunday that there had been a number of focal points to the demonstrations. Ashkelon was the focus in the morning, Jerusalem in the evening, and there were also disturbances in Beersheba, Jaffa and Bnei Brak. Police Commander Nissim Mor said that all incidents were dealt with by police forces on the ground.

The police prepared well in advance and took every scenario into account, Mor said. For that reason, thousands of policemen and mounted policemen were deployed with air support and water hoses, as well as the marine police. The national traffic police was also brought in, blocking all haredi attempts to get to the hospital. These efforts will continue in the coming days because, the police say, the danger of disturbances is not yet over.

Meital Yasur-Beit Or and Shmulik Grossman contributed to this report.

Senior ultra-Orthodox officials criticize leaders of struggle against removal of graves from Ashkelon hospital, following Jerusalem Municipality's decision to halt service to haredi neighborhoods. 'They've made us lose our power of deterrence,' one of them says.
Failed messiah was established and run in 2004 by Mr. Shmarya (Scott)Rosenberg. The site was acquired by Diversified Holdings, Feb 2016.