The comics are censored by haredi rabbis before publication. 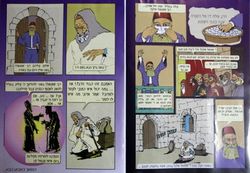 SAFED, Israel — A far cry from the thrills of Spiderman and the sexy glam of Lois Lane, chaste and religious comics have become a hit among ultra-Orthodox Jews determined not to pollute their children's minds.

For the reclusive Haredi society that shuns television, Internet and video viewed as a source of moral corruption, the no-sex, no-violence comics offer benign entertainment and a fun way of teaching tradition to their children.

Dozens of colourful comic books featuring Biblical stories and adventures of famous rabbis and sages fill the shelves of bookstores in Haredi neighbourhoods alongside the thick and austere religious textbooks.

Outside a bookstore in the ultra-Orthodox city of Bnei Brak on the outskirts of Tel Aviv, Yom Tov Cohen contently watched as his four-year-old son flicked through one.

"It is great, the kids love reading these books and at the same time they learn. It is not easy teaching your children the Bible," said Cohen, in the traditional attire of a Haredi Jew -- black coat, black hat, long curly sidelocks and a beard.

The number of "kosher" comic books has sharply risen in recent years with dozens of new publications and new artists, including women who once used aliases but today feel comfortable to publish their names.

"It may seem surprising, but today comics are getting more and more into the mainstream of the Haredi culture," said Eli Eshed, an expert in Israeli comics.

The Haredi comics industry leapfrogged with the launch of the first weekly "Kosher" comic magazine in September, created and published by comic artist Dror Yisrael Cohen.

The ultra-Orthodox communities are deeply attached to their traditional way of living established in eastern Europe in the 18th and 19th centuries and are extremely suspicious of introducing new technology.

And even Cohen, who works on a computer at his home in the northern city of Safed, does not have an Internet connection because rabbis did not authorise him to have it and because he does not want his children to access it.

Cohen swiftly sketched with a pencil on a white page, revealing within seconds the face of the hero of next week's edition -- a pious Jew who turns from rags to riches thanks to the blessing of a prominent Jewish sage.

He then went over the faint pencil lines with a black pen and after adding a few strokes of a fountain pen, he stood up to perform the evening Minha prayer facing the window of his modest apartment's eastern wall.

Cohen later scanned the black-and-white image into the computer and coloured it using a cutting edge drawing board.

To get a new magazine out every week, he needs to work fast, which sometimes comes at the expense of the quality of the comics, he admitted.

Like many Haredi comic artists, Cohen got hooked to comics when he grew up in a secular family.

When he became religious at the age of 24, he completely gave up art to focus solely on religious studies. It was only after years that he felt comfortable to return to the comics.

Haredic artists work under the strict censorship of a rabbinical board.

The board makes sure the content of their drawings will not offend or corrupt the minds of young readers or violate the Biblical edict in the book of Exodus that "thou shalt not make unto thee any graven image, or any likeness of any thing that is in heaven above."

"There is censorship and I think there should be one," Cohen said. "I make sure that the drawings have educational value and that they do not corrupt the children's soul."

The heroes of his stories, such as rabbi Yisrael Ben Eliezer who founded Hasidic Judaism, the main strain of ultra-Orthodox Judaism, in the 18th century, may even have God-bestowed supernatural powers such as telepathy or X-ray vision, but only within certain limits.

"My heroes will never have powers like the Incredible Hulk or Superman because it makes no sense. They will have power within certain boundaries of logic," said Cohen, sitting in his studio, which also serves as a bedroom for one of his 12 children.

The ultra-Orthodox comics depict in picture and colour many traditional religious tales, all of which are aimed at glorifying the Lord and teaching good virtue.

"The Haredi comics cannot deal with every topic, they are subject to severe censorship," said Eshed, the expert in the field.

"They can't show or talk about sex, of course. They can at times present women but in a very modest way, often without showing their face. Not too much violence or blood."

The comics are censored by haredi rabbis before publication.
Failed messiah was established and run in 2004 by Mr. Shmarya (Scott)Rosenberg. The site was acquired by Diversified Holdings, Feb 2016.