Former Agriprocessors Child Workers View Return To US As Opportunity

Several of the young men said in interviews last week in Postville that they hope to stay in the United States long enough to pay off their debts and save their family's land from "coyotes" — guides who help immigrants cross illegally into the United States. 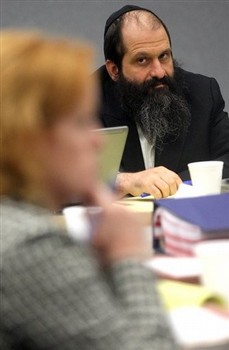 Postville, Ia. — Alfredo Marroquin Argueta was sitting on the witness stand, his hands trembling, when he saw an old picture of himself and realized how much weight he had lost in two years on a Guatemalan farmer's diet.

The weight loss, caused by nutritional deficiency, was one of the first things the Rev. Paul Ouderkirk noticed when a group from Guatemala arrived at St. Bridget's Catholic Church in Postville weeks before the Guatemalans were scheduled to testify in the child-labor trial of Sholom Rubashkin, a former Agriprocessors executive.

"It was very visible in their faces and arms," Ouderkirk said.

Argueta, 19, is one of eight former child laborers flown in from Guatemala by Iowa prosecutors to testify against Rubashkin. Rubashkin is on trial in Waterloo on 83 misdemeanor charges.

Several of the young men said in interviews last week in Postville that they hope to stay in the United States long enough to pay off their debts and save their family's land from "coyotes" — guides who help immigrants cross illegally into the United States.

They admitted feeling intense anxiety at being whisked away from their rural mountainside villages to an American courtroom to be questioned in English by lawyers.

They also shared their ultimate dream: returning home with enough cash to build modest one-story, two-bedroom homes for their families.

While in the United States, the Guatemalans are spending their time playing soccer and going to English classes. They are not allowed to work. During the trial, they are staying with friends and family still in Postville.

To pay off their debts to the coyotes and build their homes, the Guatemalans must obtain a U-visa.

The visas — which are awarded only to victims of abuse who can aid authorities in the investigation or prosecution of a crime — allow recipients to work legally in the United States for four years and apply for permanent-resident status.

Sonia Parras Konrad, a Des Moines immigration lawyer who has won dozens of the visas for other former Agriprocessors workers, said she has started the application process for the group of witnesses.

The agents, whom they remember only by their first names, wanted to meet. They said their stay in the United States would last a maximum of 90 days.

The Guatemalans had no way to verify the Americans' story. It was a leap of faith made worthwhile by the promise to return to the United States, they said.

One of the young men, Alvaro David Ajin Garcia, has testified through an interpreter that he accompanied the agent solely because "they were honest people, and you could feel they were being honest."

The young men couldn't help but imagine the possibilities. Argueta and his former co-workers said their spirits lifted. Their families smiled and hugged.

On the plane, Argueta kept thinking of how a five-hour flight separates his meager existence in Guatemala and his relatively luxurious life in Iowa. Memories of Postville and a 2008 immigration raid he had tried to forget flooded back.

"In our country, when someone leaves for the United States, there's a saying, 'He's gone to chase his dreams,' " Argueta said.

Two years ago, federal agents arrested hundreds of workers at the plant in Postville in what was then the largest U.S. immigration raid.

They detained one of Argueta's childhood friends, Agustin Porras, who sums up life in Guatemala in one sentence.

"There's nothing in Guatemala, that's what there is," he said.

The young men said they miss their families and girlfriends. Everything else, they said, they gladly left behind.

Following their deportations, they spent nearly two years tilling fields with hoes on hilly mountainsides. They receive about 40 quetzales, or about $5, for one day of backbreaking labor.

It's enough to buy the staples of a peasant's diet - beans, tortillas, bread and coffee. But the wages rarely afford more nutritious foods such as fruits, vegetables and meats.

When asked to describe their homes in Guatemala, the young men list amenities they lack: carpeting, microwaves, refrigerators and washing machines.

Large debts, often at least $5,000 per person, weigh down their families. It is the price they paid a coyote to help them enter the United States.

With the $5 Porras earns daily to help feed his family, he makes monthly payments on the debt. If he misses too many payments, "they'll take away the land where my family lives."

During the child labor trial's first week, an assistant Iowa attorney general placed a picture on the courtroom's overhead projector of Argueta inside Agriprocessors. It was taken two years ago by federal immigration agents shortly after his arrest.

The prosecutor asked Argueta, dressed in his finest collared shirt and his hair neatly combed, "Have you lost weight in the last two years?"

The Guatemalan field laborer's hands trembled. He had never been in a courtroom before, and didn't speak the language.

Argueta took one look at his rounded 17-year-old face and nodded.

When asked why, Argueta said through an interpreter, "Because in Guatemala, there's not enough work or money to buy the food that you need."

Former Agriprocessors Child Workers View Return To US As Opportunity

Several of the young men said in interviews last week in Postville that they hope to stay in the United States long enough to pay off their debts and save their family's land from "coyotes" — guides who help immigrants cross illegally into the United States.
Failed messiah was established and run in 2004 by Mr. Shmarya (Scott)Rosenberg. The site was acquired by Diversified Holdings, Feb 2016.