The criminal complaint says plant employees broke four main child labor laws: they employed minors at a meatpacking plant, exposed them to dangerous chemicals, allowed them to operate power machinery and allowed them to work more time per day and per week than is legal.

Jury selection will begin Tuesday in the trial of a former kosher slaughterhouse owner and four workers accused of thousands of child labor violations, such as allowing teenagers to use meat grinders and exposing children to dangerous chemicals.

The trial begins as the former manager of the Agriprocessors Inc. meatpacking plant in Postville, Sholom Rubashkin, awaits sentencing on 86 financial fraud convictions. Prosecutors asked a federal judge at a sentencing hearing last week to give Rubashkin 25 years in prison. 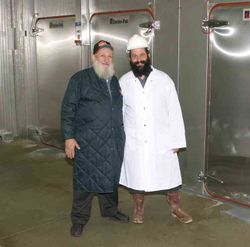 The state filed the charges in September 2008, about four months after an immigration raid at the plant led to the arrest of 389 workers.

The trial in Iowa District Court in Waterloo is expected to last three weeks. It was moved from Allamakee County, where Postville is located, at the request of the defense, which claimed it would be difficult to get an impartial jury there.

The Iowa Attorney General's Office declined to comment on the case Monday, but according the criminal complaint says plant employees broke four main child labor laws between September 2007 and May 2008: they employed minors at a meatpacking plant, exposed them to dangerous chemicals, allowed them to operate power machinery and allowed them to work more time per day and per week than is legal.

"Throughout their employment, these children were exposed to dangerous and/or poisonous chemicals including ... dry ice and chlorine solutions," Assistant Attorneys General Thomas H. Miller and Laura Roan wrote in the original complaint.

That complaint also claimed that children under 16 were allowed to use meat circular saws and power washers.

Iowa Workforce Development spokeswoman Kerry Koonce said Monday the thousands of charges are the most brought in a single case in state history.

Each charge is a simple misdemeanor that carries a potential penalty of $625 and 30 days in prison.

Based on documents Sholom Rubashkin's lawyer has filed, it appears he will try to blame some of the child labor violations on Iowa Workforce Development.

A month before the raid, U.S. Department of Labor and Iowa Workforce Development inspectors walked through the plant looking for underage workers. The state inspectors didn't find any -- a fact they later attributed to plant employees hiding one underage worker and coaching two others to lie about their ages.

One worker admitted to a U.S. Department of Labor inspector the he was underage, but federal law prevented the inspector from telling state authorities for months, according to one court document.

Agriprocessors' defense attorneys highlighted that fact and some of the initial investigative findings to claim that Iowa Workforce Development knew about the underage workers at least one month before the immigration raid.

The labor departments "had identified suspected minors in the plant, and did not remove them," lawyer F. Montgomery Brown said in a telephone interview. "Nor did they tell Agriprocessors."

Brown claimed in an earlier motion that state officials should have stepped in as soon as they knew children were working in the plant but they didn't because they wanted to finish their investigation.

"It is outrageous to continue to let suspected children earn $7.50 per hour in a packing plant while an investigation plods on," Brown wrote in the motion, which was later denied.

He also claimed the plant asked for workers' driver's licenses and birth certificates, and it wasn't the company's fault if people lied.

Roan, the assistant attorney general, wrote in her response that Billmeyer, Althouse and Freund "reasonably knew" that the information provided to them was false. Their guilty pleas to charges related to the hiring of illegal immigrants showed this, prosecutors said.

Althouse was sentenced to two years of probation, and Freund received one year of probation.

Billmeyer, who testified against Sholom Rubashkin at his criminal trial, was sentenced to one year and one day in prison.

The criminal complaint says plant employees broke four main child labor laws: they employed minors at a meatpacking plant, exposed them to dangerous chemicals, allowed them to operate power machinery and allowed them to work more time per day and per week than is legal.
Failed messiah was established and run in 2004 by Mr. Shmarya (Scott)Rosenberg. The site was acquired by Diversified Holdings, Feb 2016.