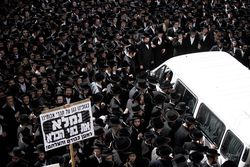 They say the discovery proves an ancient cemetery at the site that has been at the center of protests by ultra-Orthodox Jews does not contain the graves of Jews.

Protesters claim an emergency room extension at Barzilai Hospital in the city of Ashkelon is being built on an ancient Jewish cemetery. They demonstrated there when officials began removing graves this week, and rioting erupted in ultra-Orthodox areas of Jerusalem.

The Israel Antiquities Authority said Thursday the discovery of the 2,000-year-old incense altar, along with the nature of the graves, shows the cemetery was pagan.

Then, after the major part of the disinterment was finished, archeologists discovered the pagan altar.

So, after violent riots and other criminal and repugnant behavior, what did haredim do? Did they apologize to the government, police and to Israeli society at large?

Never ones to be deterred by facts, haredim held a giant funeral in Jerusalem (pictured above) for the disinterred human remains where they apologized to the dead for relocating them:

The Atra Kadisha organization and members of the Eda Haredit, who headed the struggle against the relocation of the graves at the Barzilai Medical Center in Ashkelon, held a funeral ceremony on Thursday in Jerusalem for the bones removed from the ER construction site.

Hundreds of ultra-Orthodox participated in the ceremony which was held in the city's Shabbat Square and included psalm readings and prayers asking forgiveness of the dead whose bones had been relocated.

Eda Haredit leader Rabbi Yitzhak Weiss attended along with some colleagues from the Orthodox rabbinical courts. The ceremony passed peacefully and the crowds were requested to disperse immediately afterwards. Thought there is considerable doubt about the Jewishness of the dead, kadish was said. The bones will be reburied later in a modest ceremony without the presence of crowds.

The Eda Haredit had earlier announced that it would transport the bones in 40 special caskets. The caskets were brought during the ceremony, and the crowd followed the van carrying them.

Demonstrators carried banners with the words, "During 2000 years of the Diaspora, Jewish graves were not violated the way they have been during 62 years of Zionist regime." Leaders asserted that what had happened in Ashkelon could endanger some 20,000 Jewish cemeteries around the world.

Despite being at the forefront of protests, members of Atra Kadisha cooperated with government bodies to ensure the smooth reburial. Minister for Religious Services Yakov Margi (Shas) said, "The Ministry is involving Atra Kadisha members in the respectful reburial of the skeletons and bones in Jerusalem as a unifying and calming measure."

About two weeks ago, Chief Sephardic Rabbi Shlomo Amar ruled in accordance with the request of Director General of the Prime Minister's Office Eyal Gabai, that the bones should be brought to Jerusalem. Due to the high cost of reburial and the lack of space, extensive discussions are expected on this subject. Bnei Brak and Zichron Yaacov have been mentioned as possible reburial sites.

Meanwhile, Atra Kadisha members are avoiding giving any details about the burial site out of respect for the dead, and for fear of the media and demonstrations.

While the Jewishness of the remains has been emphasized for the sake of the demonstrations, it has still not been decided whether the reburial should be as for Jewish remains or "possibly Jewish" remains.

On Thursday afternoon, the Israel Antiquities Authority announced that a fine Roman altar had been discovered at the Barzilai site, adding to the evidence that suggests it was a pagan burial site.

A senior figure in the Chief Rabbinate expressed surprise that his organization had not been instructed to deal with the graves. More than a year ago, the relocation was discussed with the organization and some members were even authorized to handle the relocation, but seemed happy that they had not had to tackle this sensitive issue.

Rabbi Yaakov Roje outlined the four halakhic principles regarding grave relocation: If it has been ruled that the graves must be relocated, the main thing is to ensure that all body parts are taken out. Secondly, the bodies must remain separate – they must not be wrapped together. Thirdly, the time between taking the bodies out and re-internment must be as short as possible. Lastly, there must be a solid partition between the corpses in the new grave.

The Jewish law haredim cite to support their riots and violence over this issue forbids disinterment of Jewish remains unless there is a clear purpose that benefits society at large and can't be easily accomplished some other way, or benefits the deceased (as in reinterment from America to Israel, say), or if disinterment might save a life.

That is why haredim continue to act as if the remains are remains of Jews. If they admit the truth, moving the graves becomes much less problematic.

And, more importantly, moving non-Jewish remains would not be justification for the riots haredim use to extort Israeli society.

The dead could only have dreamed about the medical care they could have received from modern hospitals like Barzilai.

If Barzilai had existed when these pagans lived, chances are most of them would have lived much longer, much healthier and much more pain free lives.

Halakha clearly mandates moving those bones, even if those bones are the remains of Jews. The delay in construction caused by moving the site for the hospital's expansion would certainly cost lives, and not having a ER reinforced against bombs and missiles may, as well.

I can't imagine any human being objecting to the disinterment and relocation of his remains in order to construct a hospital that will save lives and ease human suffering. I can't – but haredim, for their own selfish and amoral reasons, can.

Israeli archaeologists say workers have uncovered an ancient pagan altar while clearing ground for construction of a hotly disputed hospital emergency room.
Failed messiah was established and run in 2004 by Mr. Shmarya (Scott)Rosenberg. The site was acquired by Diversified Holdings, Feb 2016.