Agriprocessors CFO Sentenced To More Than 3 Years In Prison

Mitch Meltzer was sentenced for conspiring to make false statements to a bank. Meltzer admitted that he overstated the value of the company’s collateral as as part of his employer’s request for an advance on a revolving bank loan. 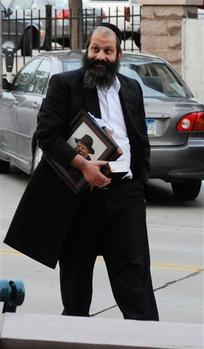 Two former members of the management team at the Agriprocessors meatpacking plant in Postville learned their fate in federal court Wednesday.

Brent Beebe, 53, a former operations manager at the plant, was sentenced to 10 months in federal prison for his role in a conspiracy to obtain fake documents for plant workers. He received the prison term after entering a guilty plea Jan. 11 to one count of conspiracy to commit document fraud.

Mitch Meltzer, 50, who served as the company’s lead accountant, was sentenced to more than 3 years in prison for conspiring to make false statements to a bank. At the September 2009 hearing where he pleaded guilty, Meltzer admitted that he signed a Collateral Certificate on Feb. 1, 2008, that overstated the value of the company’s collateral as as part of his employer’s request for an advance on a revolving bank loan.

According to court records, Beebe was one of two operations managers at the Agriprocessors plant, and oversaw beef production in the facility. The week prior to the May 12, 2008 immigration raid at the plant, Beebe conspired with other co-workers including Sholom Rubashkin, the company’s vice president who was convicted last fall of financial fraud, to help several employees obtain new fake identification documents.

Beebe, according to the court, obtained $4,500 from Rubashkin to be used as loans for approximately 19 beef production employees to pay for the new documents. A line supervisor used the money to purchase the documents and then delivered them to the plant on May 11, 2008. The documents were then used to complete new applications for several employees who did not have legitimate papers.

Court documents also indicate that Meltzer participated in a scheme with Rubashkin and the company’s chief financial officer, Yomtov (Toby) Bensasson, to falsely inflate the amount of accounts receivable collateral on Agriprocessors’ books. Rubashkin then used the inflated numbers to borrow money from the bank. Meltzer and Bensasson also manipulated monthly financial reports, reportedly at the direction of Rubashkin, and sent the false figures to the bank.

Rubashkin, who also faces state child labor law violations, was convicted by a South Dakota jury on Nov. 12, 2009 of 86 counts of financial fraud and related offenses. He is scheduled to be sentenced on June 22.

Beebe and Meltzer are two of 10 members of Agriprocessors management or office staff who have been convicted on federal charges in the wake of the massive 2008 plant raid. Only two defendants in the case have not faced prosecution: Hosam Amara and Zeev Levi. Both men are believed to have fled the country to avoid prosecution and are considered fugitives.

Both Meltzer and Beebe remain free on their previous bond and are expected to surrender to federal authorities at a yet determined date to begin their sentences. Both men were given a special assessment of $100, and will be subject to a three-year term of supervised release following their prison terms. Meltzer was ordered to make $26,919,419 in restitution to the victimized banks.

Agriprocessors CFO Sentenced To More Than 3 Years In Prison

Mitch Meltzer was sentenced for conspiring to make false statements to a bank. Meltzer admitted that he overstated the value of the company’s collateral as as part of his employer’s request for an advance on a revolving bank loan.
Failed messiah was established and run in 2004 by Mr. Shmarya (Scott)Rosenberg. The site was acquired by Diversified Holdings, Feb 2016.