Retail sales just hit a record high, all available rental property is rented, and things are looking up, mayor says. 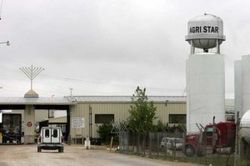 Postville is getting its groove back.

Two years after an immigration raid knocked it to its knees, the state’s most ethnically diverse community again bustles with immigrants hoping to earn a share of the American dream.

“We’re on the upswing,” said Mayor Leigh Rekow, who took office 11 months after federal agents in riot gear busted nearly 400 illegal immigrants working at the Agriprocessors kosher meatpacking plant on the morning of May 12, 2008.

The plant’s emergence from bankruptcy under new ownership and a new name, Agri Star Meat and Poultry, has fueled the town’s resurgence, Rekow said.

This time around, however, all the Agri Star workers are legally qualified to work in the United States, said plant owner and Chief Executive Hershey Friedman, who touted the company’s progress during a mid-April news conference in Des Moines.

The paychecks of the plant’s nearly 600 employees have renewed the community’s optimism and have begun to heal the wounds inflicted by the raid and its aftermath, which sundered families, imprisoned and later deported hundreds of Postville residents and plunged the plant into a downward spiral that eventually ground the town’s economic engine to a halt.

Postville’s groove — the characteristic that makes it special — is that disadvantaged people, through dint of hard labor, can still come here and build a better life for their children, said Maryn Olson, a leader in the community effort to help displaced workers and others directly affected by the collapse of Agriprocessors.

“It’s not about what you have or where you came from. Work is the great equalizer, and everyone who’s willing to work hard has a chance to get ahead in Postville,” Olson said.

Somali refugees, granted legal asylum in the United States, are among the most recent immigrants seeking to get ahead in Postville.

Scores of Somalis, who had fled their homeland’s chronic civil wars, took jobs at the post-raid Agriprocessors. Their community dwindled during the plant’s shutdown but is building again with Agri Star’s expansion.

“We are mostly single men, which is a problem,” said Abdi, who worked at Agriprocessors before its transition to Agri Star.

Working conditions are better at Agri Star, said Abdi and several of his Somali co-workers.

The Somalis worship in a makeshift mosque in a rented commercial building on Lawler Street and socialize across the street in an upstairs hall.

A bigger problem than the shortage of Somali women is the shortage of Postville housing, said Aden Abdi, an Agri Star worker whose family must remain in St. Cloud, Minn., until he can find suitable lodging.

Mayor Rekow said a concerted effort is under way to upgrade houses that deteriorated while sitting empty for more than a year.

Banks have foreclosed on hundreds of houses once owned by Gal Investments and the Rubashkin family, which also owned Agriprocessors. The city is working with the banks to secure grants to rehabilitate the worst of them, Rekow said.

“All the rentable property is rented,” he said.

The March 31 dissolution of the Postville Response Coalition, formed 16 months earlier at the depths of the town’s economic and humanitarian crisis, is a tangible sign of the community’s recovery, said Olson, the coalition’s coordinator.

So, too, are recent retail sales statistics from the Iowa Department of Revenue.

Retail sales in Postville during the last three months of 2009 (the latest available data) totaled $31.3 million — an all-time high, up 24 percent from the comparable quarter in 2008, when sales registered $25.2 million.

As expected, retail sales slumped in the last quarter of 2008 and the first three quarters of 2009 before the Agri Star payroll began its dramatic expansion.

One Postville institution that fared better than expected during the upheaval is the town’s public school system.

Enrollment declined from 604 in October 2008 to 580 a year later, but the district has more than made up for the loss with a gain this year of 39 students, Superintendent Ottie Maxey said.

Most of the recent gain, he said, is attributable to new community members taking jobs at Agri Star.

Before and after the raid, the percentage of students whose native language is not English has remained about 30 percent, said Maxey, a former principal at Kennedy High School in Cedar Rapids.

Maxey said he has observed steadily increasing community optimism since he moved to Postville 10 months ago.

So has former City Council member Aaron Goldsmith. Though the crisis has changed the town, “it is still accepting of diversity, committed to overcoming adversity and filled with the promise that working together can bring,” he said.

Postville’s Jewish community has suffered and shrunk during the ordeal, its leaders say. Rabbi Aron Schimmel, who directs the Judaic Resource Center in Postville, estimates that 40 percent of the city’s Jews have departed and that enrollment in the Jewish schools has declined by 30 percent since the raid.

“The schools, the synagogue, the library, the kosher grocery — all depended on him,” Schimmel said.

Rubashkin’s trials — literal and figurative — have been agonizing for Postville Jews, said Goldsmith, who testified on behalf of Rubashkin at his recent sentencing hearing. Goldsmith acknowledged that his friend broke the law but said he did so to keep afloat an enterprise on which many depended.

Rekow said Friedman has been open with city officials and has “done everything he said he would,” including investing nearly $7 million in plant modernization.

The new owners, who have adopted a government-based verification system to check applicants’ credentials, appear to be running the business according to law, said the Rev. Steve Brackett, pastor of St. Paul Lutheran Church and a leader in the worker relief effort.

Brackett compared today’s Postville with the early years of Agriprocessors’ expansion, when the community’s population was in flux. The first round of workers, usually single men rather than families, may not become long-term residents, Brackett said.

Though wages at the plant have increased, Brackett said he does not believe they will attract many established northeast Iowans.

Retail sales just hit a record high, all available rental property is rented, and things are looking up, mayor says.
Failed messiah was established and run in 2004 by Mr. Shmarya (Scott)Rosenberg. The site was acquired by Diversified Holdings, Feb 2016.