Henry Lopez Calel said he was the hope of his family. 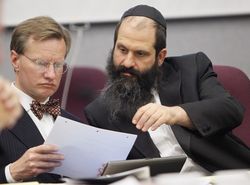 WATERLOO --- Henry Lopez Calel said he was the hope of his family.

Born in Guatemala, he followed his father to the United States to find work and support relatives back in his home village of San Jose Calderas.

Lopez took the stand Thursday morning as the state continued its against former Argriprocessors executive Sholom Rubashkin. Rubashkin is charged with 83 counts of child labor violations in connection with the Postville plant.

Rubashkin is currently awaiting sentencing on federal fraud charges that were levied after immigration officials raided the plant in May 2008.

Lopez, who found work at Agriprocessors at the age of 14, described his village of about 100 homes in Central America.

His father was the first member of his family to leave for the states, paying a "coyote" guide about $5,000, he told jurors. After some time, the father would come back to Guatemala to spend time with the family, returning to the U.S. when the money ran out.

On his father's third trip, in 2004, Lopez decided to go with because the family was "living so poorly."

Lopez was apprehended in Mexico and returned to Guatemala. Even though he failed to reach the U.S., the $5,000 debt to the coyote still stood.

Lopez told jurors the fee covered up to three attempts at the border, so he tried again and made it the second time. He said it cost another $500 to get from Texas to Postville.

When he arrived, it was $150 for forged work papers --- a resident alien card and a Social Security card. He said the ID claimed he was 18, just old enough to work at Agriprocessors.

Lopez described hauling 100-pound barrels of rejected turkey carcasses through the plant to throw them out. He was go from a hot area where he was sweating to a old area in his wet clothing.

"My clothes would freeze, and little by little my lungs would be damaged," he told jurors.

He missed work and was fired when he didn't return. That is when he went to school in Postville, finishing the eighth and ninth grade before dropping out a month into this sophomore year.

Henry Lopez Calel said he was the hope of his family.
Failed messiah was established and run in 2004 by Mr. Shmarya (Scott)Rosenberg. The site was acquired by Diversified Holdings, Feb 2016.