The Great Deceit: How The Baal Teshuva Movement Was Spurred On By Lies

How a fabricated history woven by one of the world's greatest photographers tricked hundreds of secular Jews into becoming haredi. 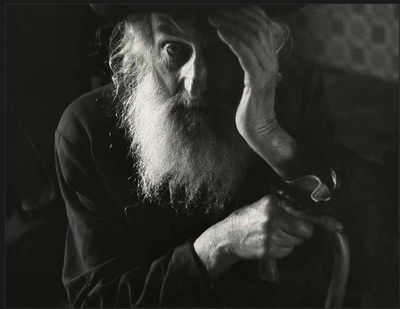 Roman Vishniac was one of the world's greatest photographers.
His pictures of pre-Holocaust Eastern European Jewish life (like the one posted above) were published as two books, the most well known of which, A Vanished World, helped spur the conversion of hundreds of young secular Jews to haredism.
But Vishniac lied.
It turns out those pictures were taken as a fundraising project for the American Jewish Joint Distribution Committee, which was trying to raise money to feed poor Polish Jews. Most of the poorest Polish Jews were hasidic, and Vishniac's job was to take pictures of the poorest of them, along with pictures of elderly rabbis with flowing white beards.
The Joint wanted to tug on American Jews' heartstrings, and Vishniac delivered.
But Vishniac also took many other pictures while on that mission, pictures that show Jewish stores loaded with goods for sale, including oranges from Palestine, and Jews dressed in European finery, without traces of beards or sheitls.
Vishniac also lied about the circumstances of the pictures he allowed to be published – lies that made some of the subjects appear poor when they were not, and haredi when they were not.
And Vishniac himself was secular.
Alana Newhouse wrote an important piece in the New York Times Magazine on this and on the upcoming exhibition of Vishniac's work – an exhibition that will for the first time include pictures Vishniac censored.
Here are a few quotes:

“The picture of the world I had recreated in my mind — the world my whole family came from — was actually from a commission to document only the poor and the Orthodox.”

“It’s as if we took pictures of homeless people in New York and then the city fell into the sea, and 50 years from now people looked at those photos and thought, That’s what New York was.”

“What’s interesting to me is less Vishniac’s tendency toward mythology than the Jewish need to have those mythologies and the attachment they have to them, even in the face of evidence to the contrary. Why are people so attached to the other story? The real story is so much better.”

“In the course of many hours working with Vishniac, it began to seem that he had become a mythmaker of his past — telling stories that were better than what really happened.”

“Jews should be absolutely elated — and not at all surprised — to discover that Jewish life in Poland was like human society anywhere, in that it contained all the human types and all of the human experiences. Will they resent being deprived by the full historical record of the holy beards and the mystical sparks, or will they have the wisdom to say, ‘Good, they were blessedly like all of us’?”

Vishniac remains a seminal photographer. But his lies unintentionally lured and ensnared many Jews – including me – in the worst haredism has to offer.
I don't think God will forgive him for that.
The entire New York Times article as a pdf file:
Download A Closer Reading of Roman Vishniac - NYTimes.com
Link.

The Great Deceit: How The Baal Teshuva Movement Was Spurred On By Lies

How a fabricated history woven by one of the world's greatest photographers tricked hundreds of secular Jews into becoming haredi.