Denise Levertov was a poet of exceptional talent.
Her mother was Welch and Christian. Her father was a hasidic scholar, a descendant of the Alter Rebbe, who converted to Christianity and became a missionary to Jews: 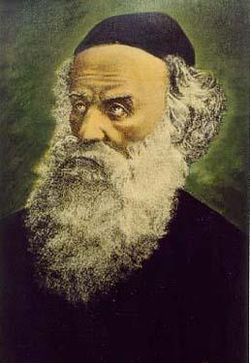 …Her father came from a distinguished family of Hassidim, one of his ancestors was the miracle working Rabbi Schneur Zalman, the Rav of White Russia, who as a child was so precociously clever that at 12 his teachers sent him home from the yeshiva with instructions not to bother returning as there was nothing else they could teach him and at his Bar-mitzvah address spoke with such passion, prescience and learning that the community immediately pronounced him an 'Iluy', a prodigy of learning. Feivel Levertov was also an outstanding scholar and in “Tesserae” Levertov recounts an episode when her 8 or 9 year old father picked up a scrap of paper in the snow “about a boy like himself who – it said – was found in the Temple expounding the scriptures to the old, reverent, important rabbis!” Entranced he took the scrap of paper home to show his father who was furious, tore the paper to shreds and threw it in the fire. It was, of course, the story of Jesus and Fevel’s fascination was prophetic because a few years later, as a student in Germany at a Rabbinical Seminary , he came across a copy of the Gospels translated into Hebrew. These he read clandestinely and as he read he became stirred by a ‘profound and shaking new conviction’ that this man, this renegade Palestinian Jew who had died during the height of the Roman empire, really was the Messiah. Paul Levertov became a JBJ, a Jewish Believer in Jesus, had himself baptised as Paul Philip and for fifteen years became a professional missionary visiting Jewish communities in places as far apart as Hungary, Bosnia, Egypt and Palestine. In 1910 took a post as Evangelist in Constantinople offered to him by the United Free Church of Scotland where he met Beatrice Spooner-Jones, a teacher at the Scottish mission school. Beatrice was an orphan from Holywell who had been brought up in the guardianship of her uncle, a Congregationalist minister who consented, when she 19, to her going abroad. Her first hope had been to go to Paris but her horrified uncle rejected the suggestion out of hand, the French capital being a totally unsuitable place for an unattached young woman. He agreed to the more dubious proposition of Constantinople because it was to teach at a church school.…

…After the war Beatrice persuaded Paul to leave battle ravaged Europe and return with her to Wales where family contacts helped arrange work for him as a Librarian at St. Deiniol’s Library in Flintshire whilst he prepared for ordination into the Church of England. From Flintshire the Levertoff’s moved to Ilford, Beatrice already pregnant with Denise and Olga a toddler. Paul had been made Director of the East London Fund for the Jews and vicar of Holy Trinity in Shoreditch. He began to conduct liturgy in Hebrew and gathered a small but loyal congregation of Jewish converts who were ecstatic to find a spiritual leader who recognised their Jewishness as much as he accepted their Christianity.…

Levertov is not the only descendant of the Alter Rebbe to convert to Christianity. The Alter Rebbe's son Moshe converted, and there are said to be others who did so, as well.

Here's a poem by Denise Levertov that mentions the Alter Rebbe and also her mother's father:

The Rav
of Northern White Russia declined,
in his youth, to learn the
language of birds, because
the extraneous did not interest him; nevertheless
when he grew old it was found
he understood them anyway, having
listened well, and as it is said, 'prayed
with the bench and the floor.' He used
what was at hand--as did
Angel Jones of Mold, whose meditations
were sewn into coats and britches.
Well, I would like to make,
thinking some line still taut between me and them,
poems direct as what the birds said,
hard as a floor, sound as a bench,
mysterious as the silence when the tailor
would pause with his needle in the air.