If federal sentencing guidelines are followed, Sholom Rubashkin will be sentenced to life in prison.
The Matzav.com report posted below is based on material from Rubashkin's legal team. It leaves out the rationale for the government's decision.
I've attached the entire sentencing memorandum as a PDF file at the bottom of this post. Here is an excerpt to give you an idea of what the government is claiming: 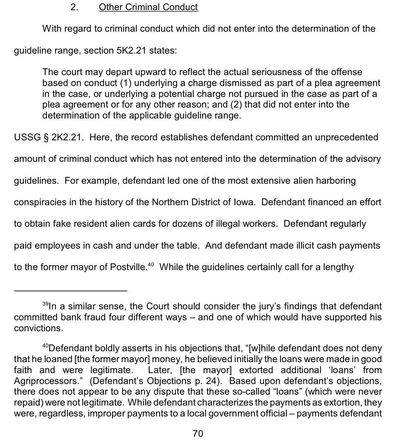 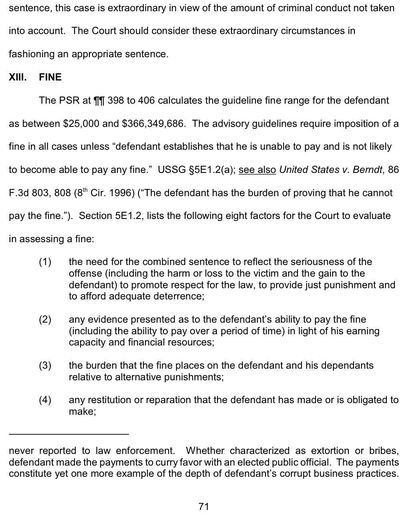 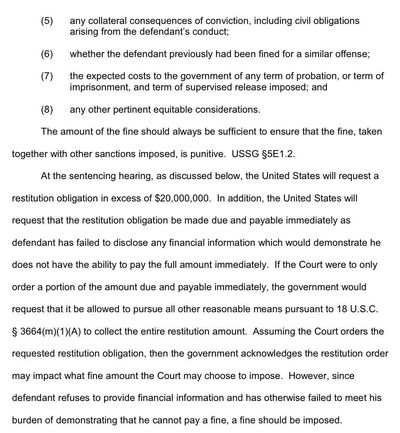 In other words, what I've been saying all along happened: Rubashkin refused to cooperate with the government in any way, while at the same time he obstructed justice by destroying and hiding evidence. And he has refused to provide the financial records needed for restitution.
That lack of cooperation, along with his lack of remorse and his obstruction of justice, is what put him in this terrible situation.
That said, lets hope the judge takes Rubashkin's family situation into account, and sentences Sholom to a lesser term – one that will allow him to get out of prison with at least a few years left to see his grandchildren.
Here is a chart from Wikipedia of the federal sentencing guidelines: 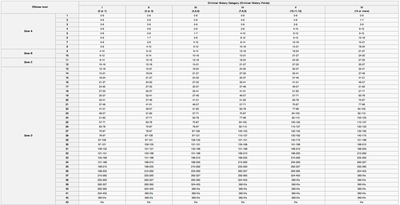 The US Government's official document explaining those sentencing guidelines.

Anti-Semitism is Alive and Well in America’s Heartland: Prosecutors Ask for Life in Prison for Rubashkin
Matzav.com

Most Jews in America today truly want to believe that Anti-Semitism is not really a problem in this country. We talk about the growing Anti-Semitism in Europe, in countries like France and England. Most responsible Jewish leaders are so afraid to use those two dirty words. They say “we can’t prove it and we have to stop with the victim mentality”. Sorry to break the news to you: anti-Semitism is alive and well in the United States of America.

Those unfamiliar with the case might think this is a murder case, a child abuse case or a case involving a repeat violent offender. Wrong again. This is the case of a Chasidic Jew who is a first time nonviolent offender. His crime was submitting false reports to the bank regarding the security for the bank’s loan. Because the bank refused some very good offers from companies that wanted to buy Agri for as much as 21 million dollars the bank ultimately had a loss of 27 million dollars.

No one is condoning criminal behavior. No one is above the law. If you commit the crime you have to do the time, however the punishment has to fit the crime. In addition, every case is different and the details and circumstances of the crime and the purpose and scope of the crime have to be part of the punishment equation. Even the prosecutors agree that Mr. Rubashkin did not gain personally from this crime and that the only reason why he committed the crime was to try to save his father’s business from going under after the government decimated the company with an Immigration and Customs Enforcement raid.

To put  the sentence being sought in the Rubashkin case in perspective, one can look at the case of Mark Turckan, the president of a St. Louis bank, pleaded guilty in early 2009 to a 21-year cover-up of misapplying funds. He was found to have caused a 25-million dollar loss, the prosecutors asked for a 63 to 78-month sentence, and he was sentenced in a Missouri federal court in June 2009 to one year and a day in prison!

So you may be wondering: why is it that the government is asking for life in prison in this case? The answer unfortunately is the two words no one wants to hear: Anti-Semitism. Of course it is a lot more complicated and detailed and no one called anyone a dirty Jew or painted a swastika so of course there is no proof. However no one needs swastika’s to know that

Sholom Rubashkin is being treated differently because he is a Chasidic Jew living in IA.

So we have two choices we can continue to shake our heads and stay silent and do nothing about this injustice or we can make our voices heard. We can make believe this is not Anti-Semitism or we can call a spade a spade. We must voice our opinions and exercise our right to freedom of speech and demand that the Attorney General of the United States of America stop this insanity now. Where are all the fighters for freedom and Democracy and equal treatment for all. Where are all the politicians that scream about racism, and bigotry?

Here is what you can do today:

1. Please send out emails to your email lists asking them to help in this effort.

3. Please call the Justice Department’s Intergovernmental and Public Liaison Office 202.514.3465 and express your reservations and concerns and ask them to give your message to Attorney General Holder. They will be counting every phone call that comes in.

5. The Rubashkin family is also looking for politicians or respected members of the legal profession to weigh in on this matter before sentencing. If you know of any law Professors, former Judges, former US Attorneys, former state prosecutors or former law enforcement officials and or Justice officials who are willing to write letters or sign on to a letter on Sholom Rubashkin’s behalf, please email pr@justiceforsholom.org…

The Government's Rubashkin Sentencing Memorandum as a PDF file:

If federal sentencing guidelines are followed, Sholom Rubashkin will be sentenced to life in prison.
Failed messiah was established and run in 2004 by Mr. Shmarya (Scott)Rosenberg. The site was acquired by Diversified Holdings, Feb 2016.