Rabbi: "I'm A Money Launderer…I'm Going To Be Arrested"

Last month, a U.S. magistrate judge denied the rabbi's application to travel to Israel for the "bris," or ritual circumcision, of his 14th grandson. 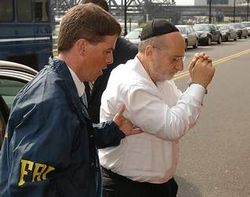 A year earlier, Ben Haim, at the time the principal rabbi at the Congregation Ohel Yaacov in Deal, bluntly stated, "I'm a money launderer. .. I'm going to be arrested."

On July 23, 2009, Ben Haim and 43 others were arrested in a massive FBI sting that targeted political corruption and money laundering. Ben Haim has pleaded not guilty.

Charged with laundering $1.5 million through Dwek, a failed real estate developer who turned government witness after being arrested by the FBI, Ben Haim has taken a leave of absence from the Ocean Avenue synagogue whose 2002 construction he helped supervise.

His father, Haham Baruch Ben Haim, who died in 2005, was a highly respected rabbi and scholar who had led the congregation for 55 years.

Earlier this month, three Brooklyn men — Yeshaye Ehrental, Schumel Cohen and Akiva Aryeh Weiss — pleaded guilty in federal court to transmitting up to $1.8 million to Ben Haim and Dwek, the government's key witness in the case against the rabbi. Ben Haim's lawyer, Lawrence S. Lustberg, recently requested a postponement of trial until May 31 to engage in additional plea negotiations.

Should the case against Ben Haim go to trial, Dwek, Ehrental, Cohen and Weiss all could be witnesses against the rabbi.

Once a regular visitor to Israel who ministered to Sephardic Jews at the Jersey Shore and in Brooklyn, Ben Haim now leads a much more restricted life.

Ben Haim wears an ankle monitor and must carry a global positioning device when he travels to New York City's five boroughs.

He has surrendered his passport and agreed not to apply for another.

Last month, a U.S. magistrate judge denied his application to travel to Israel for the "bris," or ritual circumcision, of his 14th grandson.

Assistant U.S. Attorney Maureen Nakly said Ben Haim "poses a serious risk of flight" in arguing against his application. Ben Haim's attorney, Lustberg, had argued that his client had no intention of fleeing the country, citing his extensive ties to New Jersey, along with the fact that his $1.5 million bail had been secured using property owned by Congregation Ohel Yaacov as collateral.

Ben Haim, who had been in attendance at the bris for his first 13 grandsons, also posted a $1 million personal appearance bond, but U.S. Magistrate Judge Mark Falk was unconvinced and refused to modify the conditions of Ben Haim's bail.

Previously, the court had denied Ben Haim's request to remove his electronic monitor so that he could immerse himself in a "mikvah," a traditional Jewish ritual bath. Ben Haim has also not been permitted to stay overnight at his daughter's Lakewood home.

Another money-laundering defendant, Rabbi Saul Kassin, 87, of Brooklyn, has been permitted to travel to Israel and to Florida, according to court documents. Kassin is spiritual leader of the 75,000-member Syrian Jewish community in Brooklyn.

In arguing against Ben Haim's request to attend the bris, Assistant U.S. Attorney Maureen Nakly cited the $1.5 million in cash that the rabbi is accused of having laundered through government witness Dwek. She noted he would face a minimum of 10 years in federal prison if convicted of that charge alone.

But Nakly added that Ben Haim, 58, also laundered "many millions of dollars for numerous other clients," and thus could face up to 20 years in prison if convicted.

"The evidence against defendant is overwhelming," Nakly wrote, citing more than 100 recordings of meetings with Dwek that she says will provide "indisputable evidence" of criminal conduct on Ben Haim's part.

Dwek, a former Ocean Township resident and failed real estate developer, turned government informant after the FBI arrested him on $50 million in bank fraud charges in 2006. He wore a wire and a hidden video camera and traveled throughout New Jersey and New York, making video and audiotapes of New Jersey politicians and Orthodox rabbis.

Solomon Dwek pleaded guilty to bank fraud charges in October 2009. He has not yet been sentenced.

A total of 46 people have been charged in the FBI sting operation, the largest federal investigation in the state's history.

Solomon Dwek pleaded guilty to bank fraud charges in October 2009. He has not yet been sentenced.

A total of 46 people have been charged in the FBI sting operation, the largest federal investigation in the state's history.

Seventeen defendants so far have pleaded guilty, and one was convicted at trial.

Ben Haim, the government contends, was at the heart of an international money-laundering scheme, with a connection to an Israeli man, "I.M.," who was a ready source of cash.

During one meeting in Brooklyn, Ben Haim spoke with Dwek about his source.

Ben Haim said he talked to the man every day or every other day, and said in the past four years, the Israeli had the rabbi send out wires, under different names, all over the world, from Australia to New Zealand to Uganda, according to the FBI's complaint.

"It's unbelievable. I never saw anything like it," Ben Haim said, according to court documents. "I mean every country imaginable. Turkey, you can't believe it. . . . All different names. It's never the same name . . . Switzerland, everywhere, France, everywhere, Spain . . . China, Japan."

The FBI contends that Dwek turned over checks made out to charities run by Ben Haim, after telling the rabbi the money represented the proceeds of illegal activities,

including the sale of fake designer handbags. Dwek also told the rabbi he was trying to hide cash from the government since his massive estate was in bankruptcy.

For a fee, the Israeli connection would make money available through "cash houses," run out of Brooklyn homes, offices and in one instance, a bakery, according to court documents.

The men who ran those cash houses obtained the money at the direction of the co-conspirators in Israel, then gave the funds to rabbis in Deal and Brooklyn, including Kassin and Rabbi Edmond Nahum, principal rabbi at the Synagogue of Deal, according to court papers.

The religious leaders took their cut, generally 10 percent, then turned over the remainder to the FBI witness, according to court documents.

Posted at 06:47 AM in Crime, Litigation, etc., Haredim, Sefardim | Permalink

Rabbi: "I'm A Money Launderer…I'm Going To Be Arrested"

Last month, a U.S. magistrate judge denied the rabbi's application to travel to Israel for the "bris," or ritual circumcision, of his 14th grandson.
Failed messiah was established and run in 2004 by Mr. Shmarya (Scott)Rosenberg. The site was acquired by Diversified Holdings, Feb 2016.