« Beggars Kicked Out Of Kotel | Main | Is Advocate For Sexually Abused Haredim A Cult Member Who Himself Abuses Victims? »

A settlement between Birdsboro, Pa.-based Mehadrin Kosher Poultry and Berks County Court means the company's poultry processing plant will remain open and that 185 jobs will be saved, according to a report by the Reading Eagle.

Mehadrin faced an order to shut down late last week under allegations the plant was discharging excessive waste into local sewer facilities. Following a court hearing Friday, the company agreed in a settlement to conduct daily environmental tests of its discharge and to pay $95,000 in overdue sewage bills, the local newspaper reported.

The company reportedly also must obtain an industrial waste discharge permit from the local township.

Township officials told the Eagle Mehadrin had discharged upwards of 329,000 gallons of waste per day, exceeding the daily limit of 75,000 gallons.

Paul Bridges, Mehadrin's vice president of operations, is quoted as saying the company stored 200,000 gallons of waste in 10 tanks at the plant to avoid having to close on Monday.

Bridges reportedly testified during the hearing that upgrades to Mehadrin's waste system include measures to prevent chicken blood from entering the sewers. 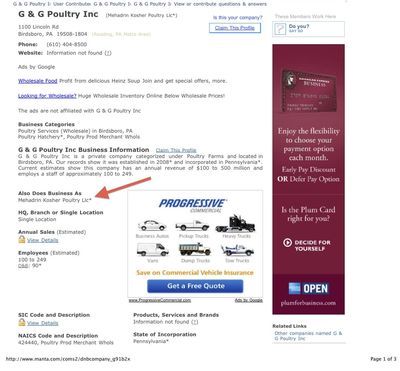 And, in 2008 G & G's former owner, Mayer Grunbaum, and it's waste pre-treatment operator, David Weiszer, were charged with 48 counts of illegal waste dumping and faced a potential total of 255 years in prison.

BIRDSBORO, Pa. — An ammonia leak at a kosher Pennsylvania poultry plant has led to the evacuation of about 125 people, including six who suffered non-life-threatening injuries.

Emergency crews were called Tuesday night to the Mehadrin Kosher Poultry plant in Birdsboro, which is about 8 miles southeast of Reading.

Exeter Township Sgt. Michael Bailey says ammonia was still leaking as of 11:15 p.m. He says the leak was contained to the plant and no animals were removed.

Six people were taken to the hospital for treatment of exposure to the gas. None of the injuries appeared to be life-threatening.

Ammonia can cause irritation to the skin, eyes and respiratory tract. In high concentrations, it can cause severe burns or death.

The plant closed briefly last week amid a dispute with Exeter Township over sewage discharge and sewer bills.

At any rate, it seems G & G, AKA Mehadrin, still has difficulty following the law.

But ammonia leak yesterday forces evacuation of plant.
Failed messiah was established and run in 2004 by Mr. Shmarya (Scott)Rosenberg. The site was acquired by Diversified Holdings, Feb 2016.