« Scion Of Chabad Dynasty Became A Christian Missionary | Main | Will She Ever See Her Children Again? »

An Army medic who served in Iraq became a hero in the stands at Yankee Stadium on Wednesday when he saved a prominent Bronx rabbi's wife choking on a piece of kosher London broil. 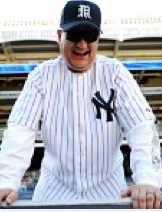 He's a true angel out of left field.

An Army medic who served in Iraq became a hero in the stands at Yankee Stadium on Wednesday when he saved a prominent Bronx rabbi's wife choking on a piece of kosher London broil.

John Stone, 38, of Montville, Conn., sprang into action when he spotted Toby Weiss gagging about 15 rows in front of him in the section behind home plate.

"It was a very big scare. Toby's life was saved by a man who really, for us, is a great hero," said Rabbi Avi Weiss of the Hebrew Institute of Riverdale.

"There were a bunch of people around her and I thought they had it under control," Stone told the Daily News. "But when I looked closer, it was evident they didn't.

"Basically, I just went down there and told the guy working on her that I'm an Army medic," said Stone, a staff sergeant with the Connecticut National Guard.

As the choking woman began to turn blue, the attention of fans turned from Derek Jeter and Alex Rodriguez to the rescuer in a Don Mattingly jersey performing the Heimlich maneuver in the stands. 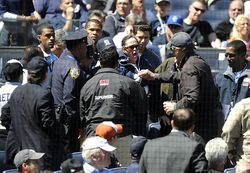 "I stepped behind her, gave her about five or six abdominal thrusts and eventually she coughed up whatever she was choking on," Stone said.

Toby Weiss was checked out at a Stadium first-aid station as a precaution and returned to her seat to thank Stone. "I said to him, 'I'm a big Yankee fan, but I really didn't want to die in Yankee Stadium,'" she said.

Rabbi Weiss said other people rushed to help his wife. "People tried very hard to do the Heimlich maneuver, but it just wasn't working and it was getting desperate," he said. "Suddenly this kind of Elijah figure appeared from nowhere. He knew exactly what to do."

Following the scare, fans applauded, hugged and high-fived Stone on his way back up to his seat. Stone was at the Stadium with his brother Jamie, an Army infantry soldier on leave from duty in Afghanistan.

Word of the heroics quickly spread to Bombers' honchos, who gave Stone gift bags and moved him, his brother and his brother's girlfriend down to the first row of the Legends section, where seats normally go for about $1,250 each.

Though Stone treated much more serious battle wounds during his tour of duty in Iraq in 2004 and 2005, he never performed the Heimlich maneuver for real until yesterday.

"I treated soldiers a lot worse than her, but this is the first time I've ever done it in the civilian world," Stone said. "I'm just happy that lady is okay."

Stone said he can't help but think he was destined to be at yesterday's game, his first visit to the new Yankee Stadium.

"I've been a Yankee fan my whole life," said Stone, proudly wearing his pinstripes and a University of Maine cap. "I'm kind of still in shock about everything that went on."

An Army medic who served in Iraq became a hero in the stands at Yankee Stadium on Wednesday when he saved a prominent Bronx rabbi's wife choking on a piece of kosher London broil.
Failed messiah was established and run in 2004 by Mr. Shmarya (Scott)Rosenberg. The site was acquired by Diversified Holdings, Feb 2016.