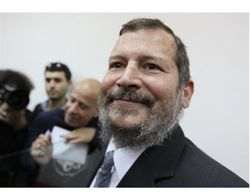 Former Jerusalem Mayor Uri Lupolianski was arrested Wednesday on suspicion of taking a bribe and money laundering as part of the Holyland affair.

Lupolianski is the most senior public figure to be questioned in the affair so far.

Upon entering the courtroom he told reporters, "I feel good, thank God. I find it strange."

Lupolianski said Ehud Olmert, who served as Jerusalem mayor before him, was responsible for the affair. "The mayor is the one who decides; he is the navigator," he told Channel 10.

Lupolianski, who served as Olmert's deputy at the time, said that "the deputy mayor has no responsibility. This means good things and bad things. There is no responsibility. It's nothing. It's just a title to take care of it, to make it nice. The mayor is the one who decides, and that's the truth."

The Jerusalem Magistrate's Court accepted the police's request to extend Lupolianski's remand by five days. He is suspected of taking a bribe, money laundering, conspiring to commit a crime, fraud, breach of trust and tax offenses.

Lupolianski served as chairman of the local planning and construction committee in Jerusalem when the Holyland project was approved.

According to the police, during his term in different roles at the Jerusalem Municipality, Lupolianski demanded and received bribes and money from the Holyland project's entrepreneurs through a third party.

In addition, Lupolianski is suspected of receiving $30,000 for his personal use and in order to pay political activists during the Jerusalem mayoral elections in 2003, as well as $100,000 in 2005 as a donation to an advanced Judaic studies program run by his son.

In exchange for the bribe, Lupolianski allegedly worked to advance the Holyland project in accordance with the entrepreneurs' demands.

During his tenure as deputy mayor from 1993 to 2003, and later as mayor from 2003 to 2008, Lupolianski allegedly worked to speed up the discussion and approval of the city construction plan in the local planning and construction committee, to postpone the hearing of nearly 1,000 objections, to prevent lowering the buildings by two floors, to lower the land betterment taxes and to support the project's city construction plans.

The police suspect that thanks to Lupolianski's activities, Holyland's entrepreneurs saved millions of shekels. He also helped boost the project and increase the entrepreneurs' income significantly.

'He did not disrupt investigation'
Judge Abraham Heiman explained that he decided to extend Lupolianski's remand for fear of a disruption of the investigation.

"The initial suspicions have become stronger. The investigation material contains more and beyond a reasonable doubt. The case I am dealing with is extremely serious," he said.

The police representative, Superintendent Lior Rice, said that "the suspect betrayed the public's trust while taking a bribe. We suspected him from the start of the investigation."

Rice added that apart from the donations, Lupolianski had received additional funds and that receipt had been issued for the donations.

Lupolianski's lawyer, Attorney Yair Golan, claimed that his client "never took a brine or even one penny and cooperated fully with his investigators." According to the lawyer, "There is not one piece of evidence that Lupolianski tried to disrupt the investigation since it became public."

Golan added that "the family of entrepreneur Hilel Cherny donated to Yad Sarah for 20 years, and not only in the past few years. All the donations were legal. Nothing went into his pocket. Indeed, he founded and volunteered in Yad Sarah, but this is his only connection to the association. He is completely clean."

Yad Sarah said in a statement that the association "has nothing to do with the Holyland affair and never received bribes. If required, Yad Sarah will cooperate with the law enforcement authorities as needed."

Earlier Wednesday, Olmert's media advisor said the former prime minister has decided to cut short his stay in Europe and will land in Israel on Wednesday night on the backdrop of the Holyland corruption scandal he has been implicated in, even though he denies any connection or involvement with the affair.

The remand of six of the suspects detained in the Holyland case was extended by five days. Jerusalem Municipality's legal advisor received a request to halt construction on the Holyland real estate project. He promised to give the case priority.

Eli Senyor and Shmulik Grossman contributed to this report