A US Senator has an unexpected kosher Shabbat lunch with Orthodox Jews.

Fishman's, the kosher meat market/deli/grocery store/bakery based in the Minneapolis suburb of Saint Louis Park, hosted a pre-Passover Sabbath lunch today for people who had finished their Passover cleaning and who didn't want to have non-Passover food in their homes.
People made reservations and pre-paid before Shabbat, so no money changed hands on the Sabbath.
But from the outside, Fishman's– located in what was once the location of the area's premier 'kosher-style' non-kosher deli. the Lincoln Del – looked like it was open. 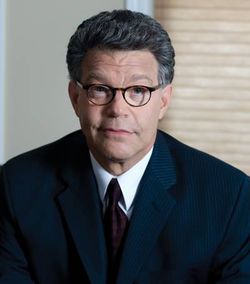 Enter – literally – former Saturday Night Live star and current US Senator from Minnesota Al Franken, who grew up close by and who presumably as a youth and young adult ate with some frequency at the Lincoln Del.
The Senator lived in NYC for many years and apparently didn't realize the Lincoln Del had long since closed. So Franken and a staffer wandered into Fishman's hungry for Eastern European Jewish soul food.
But what uber liberal Franken walked into was a crowd that, statistics say, voted Republican, supports Israel's right wing and doesn't much like President Obama or Franken.

Yet Fishman's Orthodox owner, Stuart Fishman, seated Franken and his staffer and happily served them various deli items, salads and chulent. This may have been Franken's first kosher Shabbat meal ever, and probably was his first taste of chulent.
Franken chatted with other diners – who were happy to welcome Franken to their communal meal – regaling them with stories from his show biz days.
A heimishe time was said to be had by all.
[Hat Tip: Aryeh Calvin.]

A US Senator has an unexpected kosher Shabbat lunch with Orthodox Jews.