Woman unable to marry for 48 years by husband who refused to give his wife a religious divorce.

Longest ‘chained wife’ freed after husband’s death
Susan Zinkin and Israel Errol Elias divorced in 1962, but he refused to give her a get until his death, making her what it believed to be the world's longest serving agunah.
By Leon Symons • London Jewish Chronicle 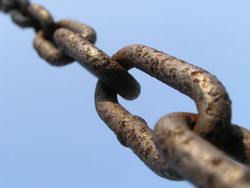 The husband of the woman who was believed to be the world's longest-serving agunah – “chained wife” – has died.

Susan Zinkin and Israel Errol Elias divorced in the civil courts in 1962, but he refused to give her a get, or religious divorce.

Ms Zinkin was therefore unable to remarry under Orthodox auspices, or have more children without them being labelled mamser, or illegitimate.

News of the death of Mr Elias, who was 86 and lived in Golders Green, emerged on Monday.

Ms Zinkin, a retired English teacher who now lives in Israel, told her friend Gloria Proops: “A weight has been lifted from my shoulders”.

Ms Proops was the founder of the Agunah Campaign, which successfully campaigned for 33 women in Britain to receive a get.

Ms Zinkin divorced Mr Elias for mental cruelty after he kidnapped their baby daughter Deborah and took her to Israel.

The Agunah Campaign held weekly demonstrations outside Mr Elias’s home, but were unable to persuade him to give his ex-wife a get.

Ms Proops said: “I always said Susan would become a widow to be free of this marriage, that has limped along for all these wasted years”.

Woman unable to marry for 48 years by husband who refused to give his wife a religious divorce.
Failed messiah was established and run in 2004 by Mr. Shmarya (Scott)Rosenberg. The site was acquired by Diversified Holdings, Feb 2016.