"It was a mitzvah to him, a Hebrew word that means a good deed and an obligation," defense lawyer says.

The rebbe made him do it.

A Brooklyn developer accused of fleecing dozens of Hasidic families in a massive subprime mortgage fraud scheme took cover behind a divine defense on Tuesday. 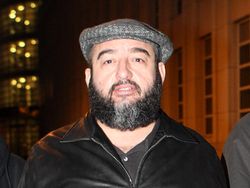 "It was a mitzvah to him, a Hebrew word that means a good deed and an obligation," defense lawyer Susan Necheles said in her opening statement in Brooklyn Federal Court.

Schneerson is considered by some followers to be their Messiah, and thousands of Hasidim from all over still make a pilgrimage to his grave site 15 years after his death.

Assistant U.S. Attorney William Schaeffer said Ezagui was nothing but a crook who scammed $2.6 million from condominium buyers and more than $10 million from banks.

"Family after family who trusted the defendant are fighting against foreclosure of the homes they bought from him," Schaeffer told the jury.

Prosecutors built a criminal case against Ezagui after the Daily News revealed in 2008 how he allegedly conned buyers into purchasing condos, then refused to hand over the deeds when the construction was completed.

Instead, Ezagui allegedly gave the deeds to family members - including his wife, father and mother - who applied for mortgages on condos the victims thought they owned.

Although Ezagui had the grand rebbe's blessing, he needed cash to build and that's where the investors came in, Necheles argued.

She said the so-called victims are sore losers trying to use the criminal justice system to recoup their investment losses.

The government's first witness appeared confused by the contracts and promissory notes.

"I thought Ezagui was a good man and I still think he's a good man, but I trusted that whatever I signed was not going to hurt me," said Tova Eilenberg, who bought two apartments at 770 Lefferts Ave.

Posted at 08:32 AM in Chabad, Crime, Litigation, etc., Haredim | Permalink

"It was a mitzvah to him, a Hebrew word that means a good deed and an obligation," defense lawyer says.
Failed messiah was established and run in 2004 by Mr. Shmarya (Scott)Rosenberg. The site was acquired by Diversified Holdings, Feb 2016.