The saga of the alleged conman and human trafficker takes another bizarre turn.

I received the following email and documents last night from someone claiming to be Jorge Puello's mother. The email appears to have been sent from Amsterdam, The Netherlands.
[Update 10:15 am CST – I received another email a few minutes ago purporting to be be from Puello's mother. It appears to have been sent from Santa Domingo, Dominican Republic.]
Here are the documents and the email, posted in full: 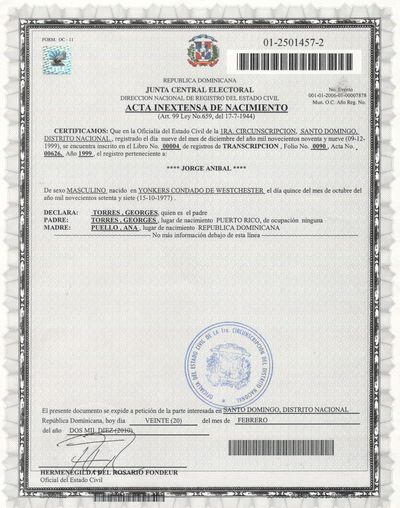 TO THE MEDIA AND TO PEOPLE THAT DON´T KNOW WHO THIS CASE IS REFERING TO:

THIS CASE IS ABOUT JORGE TORRES PUELLO. THE PERSON WHO RISK HIS LIFE TO SAVE AND HELP THE 10 AMERICAN MISSIONARIES IN HAITI, HE IS BEING PERSECUTED BY A FRIVOULOUS PROSECUTER WHO HAVE MADE A FALSE AFFIDAVIT AND THE WHOLE CASE IS BASED ON FABRICATED EVIDENCE. PLEASE INVESTIGATE AND YOU WILL SEE.

Dear People at the United States Department of Justice, My name is Ana Rita Soledad Puello Lopez (May 14th, 1961), I am a United States Citizen living in the Dominican Republic, I own a child care and a School for over 10 years, my complaint is about an illegal and personal vendetta that a federal prosecutor (William B. Darrow and others unknown individuals) has against my son JORGE ANIBAL TORRES (October 15, 1977) Who was arrested at the request of the United States in Canada in 2002. While awaiting extradition to the United States, My son gathered all information that proof that the evidence in his case were all fabricated evidence and send to the Minister of Justice of Canada all said evidence as a result he was released on an Habeas Corpus on June 9th, 2004, for being illegally detained at the request of THE UNITED STATES AND this criminal prosecutor. (there is a civil law suit filed in Burlington’s federal court under 03CV000064 with all the evidence that the case is fabricated)

After his release from this illegal detention, my son decided on or about April 21, 2006, to move to the Dominican Republic a country that even if born in the United States, recognizes him as Dominican Citizen.

On or about February 1st, 2010, My son is recognize by law enforcement authorities in Haiti while risking his life in helping 10 detained American missionaries who were wrongfully accused.

On or about February 18th 2010, he affirms to the Court that my son is a United States Citizen and hides intentionally that my son is also Dominican Citizen. With the intention of misguiding the court and securing an extradition request that is barred for being RES JUDICATA and barred as per the Extradition treaty between the United States and the Dominican Republic which states that the following:

Persons shall be delivered up according to the provisions of this Convention, who shall have been charged with or convicted of any of the following crimes:

1.       Murder, comprehending the crimes designated by the terms of parricide, assassination, manslaughter, when voluntary, poisoning or infanticide.
2.       The attempt to commit murder.
3.       Rape, abortion, carnal knowledge of children under the age of twelve years.
4.       Bigamy.
5.       Arson.
6.       Willful and unlawful destruction or obstruction of railroads, which endangers human life.
7.       Crimes committed at sea.
(a)    Piracy, as commonly known and defined by the laws of Nations;
(b)   Wrongfully sinking or destroying a vessel at sea or attempting to do so;
(c)    Mutiny or conspiracy by two or more members of the crew or other persons on board of a vessel on the high seas, for the purpose of rebelling against the authority of the Captain or Commander of such vessel, or by fraud or violence taking possession of such vessel;
(d)   Assault on board ships upon the high seas with intent to do bodily harm.
8.       Burglary, defined to be act of breaking into and entering the house of another in the night time with the intent to commit a felony therein;
9.       The act of breaking into and entering into the offices of the Government and public authorities, or the office of bank, banking houses, saving banks, trust companies, insurance companies, or other buildings not dwellings with intent to commit a felony therein.
10.   Robbery, defined to be the act of feloniously and forcibly taking from the person of another, goods or money by violence or by putting him in fear.
11.   Forgery or utterance of forged papers.
12.   The forgery or falsification of the official acts of the Government or public authority, including Courts of Justice, or the uttering or fraudulent use of any of the same.
13.   The fabrication of counterfeit whether coin or paper, counterfeit titles or coupons of public debt, created by National, State, Provincial, Territorial, local or Municipal Government, Bank notes or other instruments of public credit, counterfeit seals, stamps, dies and marks of State or public administrations, and utterance, circulation or fraudulent use of the above mentioned objects.
14.   Embezzlement or criminal malversation committed within the jurisdiction of one or the other party by public officers or depositaries, where the amount embezzled exceeds two hundred dollars.
15.   Embezzlement by any person or persons hired, salaried or employed, to the detriment of their employers or principals, when the crime or offence is punishable by imprisonment or other corporal punishment by laws of both countries, and where the amount embezzled exceeds two hundred dollars.
16.   Kidnapping of minors or adult, defined to be the abduction or detention of a person or persons, in order to exact money from them or their families, or for any other unlawful end.
17.   Larceny, defined to be the theft of effects, personal property, or money of the value of twenty-five dollars or more.
18.   Obtaining money, valuable securities or other property by false pretenses or receiving any money, valuable securities or other property knowing the same to have been unlawfully obtained, where the amount of money or value of the property so obtained or received exceeds two hundred dollars.
19.   Perjury or subornation of perjury.
20.   Fraud or breach of trust by a bailee, banker, agent, factor, trustee, executor, administrator, guardian, director or officer of any Company or Corporation, or by any one in any fiduciary position, where the amount exceeds two hundred dollars.
21.   Crimes and offences against the laws of both countries for the suppression of slavery and slave trading.
22.   The extradition is also to take place for participation in any of the aforesaid crimes as an accessory before or after the fact, provided such participation be punishable by imprisonment by the laws of both Contracting Parties.

No were in the treaty it mentions any immigration crimes or alien smuggling or it even mention any of the acts of which my son is accused.

The action of this prosecutor violates a Department of Justice guideline, which states the following: 9 USAM 602

Procedures For Requesting Extradition From Abroad

contacting the Office of International Affairs;
making a preliminary determination of extraditability;
deciding whether to ask for provisional arrest; and
Submitting the required documents in support of the formal request for extradition.
These steps are described more fully in the following sections.

Some courts have held that the Speedy Trial Clause of the Sixth Amendment or the Speedy Trial Act require the government to make a diligent good-faith effort to bring the defendant to trial promptly; in the context of extradition, this means that the government is obligated to seek the extradition of a fugitive as soon as his or her location becomes known unless the effort would be useless. E.g. United States v. Blanco, 861 F.2d 773 (2d Cir. 1988), cert. denied, 489 U.S. 1019 (1989); United States v. Pomeroy, 822 F.2d 718 (8th Cir. 1987); United States v. Walton, 814 F.2d 376 (7th Cir. 1987). Consequently, the prosecutor should contact the Office of International Affairs as soon as the whereabouts of a fugitive or the target of an investigation is known. See also USAM 9-15.225.

A fugitive may be non-extraditable for any number of reasons, including but not limited to instances where he or she is a national of the country of refuge, the crime is not an extraditable offense, the statute of limitations has run in the foreign country, or extradition was requested and denied. (If, after discussing the case with the Office of International Affairs (OIA), the prosecutor concludes that the fugitive is not extraditable, that conclusion and the reasons should be documented. See USAM 9-15.225.)

Besides Dominican National law states the following on extradition:

“Illicit drug Trafficking and controlled substances money laundering originating goods of this activity, murder, kidnapping, stupor, subtraction or seduction of minors of fifteen (15) years, commerce halter or proxenetismo, robbery with violence, falsification of currencies, swindles, crimes regarding the traffic of historical objects and archaeological and the aerial piracy. ” ONLY.

NO WHERE DOE IT SAY IMMIGRATION OFFENCES OR HUMAN SMUGGLING.

AUSA William B. Darrow knew all the time where my son was, when my son was released in Canada by the Canadian court this illegal Prosecutor just did not care about Extraditing my son to the United States. Proof of it is his frivolous silence from 2003 until 2010.   Now he starts this SECOND EXTRADITION REQUEST, misleading and withholding the facts of this case in an abusive and wasteful of government resources, Furthermore in violation of International and Dominican laws he has sent 2 Criminals from the United States Marshals services and from the United States embassy to break and enter without a Dominican or U.S. Warrant in violation of Both Dominican and American constitutions and laws.

I have made all effort by contacting the U.S. Marshals and the Department of State in Washington to Challenge and denounce this illegal activities conducted by the United States government against United States dual Citizens in foreign soil.

The illegal breaking and entering, illegal search and seizure was recorded by CNN and broadcasted life in the United States, at no time these Criminals United States government mercenaries had any warrants, permission or lawful excuse to disrupt my personal life.

We told Mr. William B. Darrow in the past we will repeat the same words today. WE WILL NEVER SURRENDER MY SON, AND WILL TAKE THIS MATTER TO THE NEW CONSTITUTIONAL TRIBUNAL OF THE DOMINICAN REPUBLIC AND EXAUST ANY LEGAL AVENUES IN THE CASE, WE WILL MAKE THIS THE LONGEST CASE OF HIS CAREER.

Signed in Santo Domingo, the sovereign country of the Dominican Republic, this 26th day of February, 2010.

Mother of the Defendant.

ALSO THIS CASE WAS ALREADY ENTERTAINED BY THE HONORABLE JUDGE ZIGMAN IN CANADA AND HE DISSMISSED COUNT TWO OF THE INDICTMENT THIS CASE IS RES JUDICATA.

COPIES TO ALL CONGRESS MEMBERS, THE COURT (will be sent a a motion to the court), THE MEDIA AND ALL CONCERN.

SEE HISTORY OF THE CASE, AND ALSO CHECK FOR ALL THE FABRICATED EVIDENCE IN THIS CASE IN THE CIVIL COMPLAINT FILED UNDER:

AND THE FALSE AFFIDAVIT PRESENTED TO THE  MAJISTRATE JUDGE

Posted at 09:54 AM in Crime, Litigation, etc., Current Affairs | Permalink

The saga of the alleged conman and human trafficker takes another bizarre turn.