Already the first Jewish school in Washington history to qualify for a state basketball tournament, Northwest Yeshiva will also become the first school in the state to forfeit out of a state-tournament game. 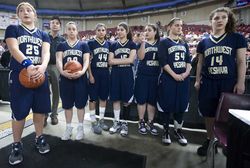 YAKIMA, Wash. -- When it comes to balancing the tenets of religious faith with a schedule of athletic events, it's not much of a balancing act at all.

That is the lesson the players on the girls team at Northwest Yeshiva, an Orthodox Jewish high school of roughly 60 students on Mercer Island, will both learn and teach today when they forfeit a Class 1B tournament game rather than break a Jewish fast.

Already the first Jewish school in Washington history to qualify for a state basketball tournament, Northwest Yeshiva will also become the first school in the state to forfeit out of a state-tournament game.

The team is scheduled to face St. John-Endicott at 12:30 p.m. in a consolation-bracket game. Today, though, happens to be the "Fast of Esther," one of five fasts on the Jewish calendar that call for no eating or drinking -- even water -- until nightfall.

Playing the game without being able to rehydrate would be "an unacceptable risk" for the players, said Rabbi Bernie Fox, head of the school. Short of being able to move the game time -- an accommodation the Washington Interscholastic Activities Association wasn't willing to make -- Northwest Yeshiva school leaders opted to forfeit today's game.

And the players support the decision.

"It's really cool to be here, first of all. We worked really hard to get here, to qualify for state," said sophomore Julia Owen, one of the team's top players. "But we're also very happy to be able to show that our religion is very important to us. Although it's hard because it would be great to get the chance to continue, we're not wishing we could ignore the fast and play, because observing the fast is important."

Northwest Yeshiva school leaders had appealed to the Washington Interscholastic Activities Association board to adjust the tournament schedule so the team could avoid playing during the fast. The school indicated it would be willing to play at a non-SunDome site, even on the home court of its Eastern Washington opponent, if that would resolve the issue.

WIAA bylaws allow for tournament schedule adjustments for teams that recognize the Saturday Sabbath. But making game-time changes in this case, WIAA executive director Mike Colbrese said, would be unfair for the other teams whose schedule would be affected.

It would force championship-bracket teams to play early games on less rest, for example, and possibly without the morning shoot-around practice typically held at available high school or middle school gyms by teams playing in the evening bracket.

"As to the request that could we do some rescheduling to deal with this particular issue," Colbrese said, "that would negatively impact the schedule for all 31 of the other teams involved.

"And if we were to go off-site with (any rescheduling), we've basically taken both teams out of their schedule and they end up playing their game at night, not in the afternoon. And they're also not getting that state tournament experience, which is really what the whole thing is about."

Rabbi Fox said he understood the WIAA's position, but that it was also unacceptable for the Northwest Yeshiva players to break the fast in order to play. The team -- known as the 613s, a reference to the number of commandments they serve -- knew coming into this week's tournament they might have to forfeit their second-round game.

A victory on Wednesday would have put them into a 7:30 p.m. game today, after the fast had ended. But their first-round opponent was heavily favored Sunnyside Christian, one of the tournament favorites, and Northwest Yeshiva lost 62-25.

"What we hope to accomplish when we educate our children," Fox said, "is that the ethical and moral essence we teach them -- whether they be of a secular, humanistic morality or a religious morality -- that they will extend those lessons beyond their home and school into their life and actions.

"If we're loyal to our values only in the confines of our school or our private home, then we've taken the whole meaning away from them."

The team intends to show up for its game against St. John-Endicott in uniform, shake hands with the opposing players "and congratulate them and wish them the best," Fox said.

Colbrese said he didn't know if the WIAA board would consider imposing any sanctions against Northwest Yeshiva for forfeiting. "We haven't had that discussion yet," he said, adding that the WIAA wouldn't take issue with Northwest Yeshiva's desire to show up in uniform, shake hands and step aside.

"That's a teachable moment," he said. "Both sides have a lot to learn from something like that."

Ironically, were Northwest Yeshiva in any other classification or the tournament held in any other week, the issue wouldn't come up. The next fasting date on the Jewish calendar isn't until late June.

This certainly isn't the first time, even in the Yakima Valley, that sports has taken a back seat to religious beliefs.

The most prominent recent example was at Mabton, where star basketball player Trishi Williams -- co-player of the year and leading scorer of the South Central Athletic Conference West as a senior in 2008-09, couldn't play Friday night games because of her Seventh-day Adventist faith. The Adventist Sabbath is Saturday, with observance beginning at sundown Friday.

That season, the Vikings barely missed a state berth when they lost in overtime in their final game -- a loser-out, winner-to-state affair. It was on a Friday night, and Williams, the league's top player, couldn't participate.

"It's kind of tough when you have the co-player of the league and she can't play," said Mabton athletic director Brock Ledgerwood. "But it kind of puts sports into perspective.

"That school (Northwest Yeshiva) and those families are trying to teach those kids things that go way beyond sports."

And, in the end, Northwest Yeshiva did get to state, and the girls did get to play. One-and-out will have to do.

"Even though we only got to play one game here," Julia Owen said with a smile, "it was a really fantastic experience for all of us."

Posted at 11:04 AM in Jews In Sports, MO & Chardal, Religion, Religion & State | Permalink

Already the first Jewish school in Washington history to qualify for a state basketball tournament, Northwest Yeshiva will also become the first school in the state to forfeit out of a state-tournament game.
Failed messiah was established and run in 2004 by Mr. Shmarya (Scott)Rosenberg. The site was acquired by Diversified Holdings, Feb 2016.