…definitely yes, if this letter is authentic. But it apparently is not: 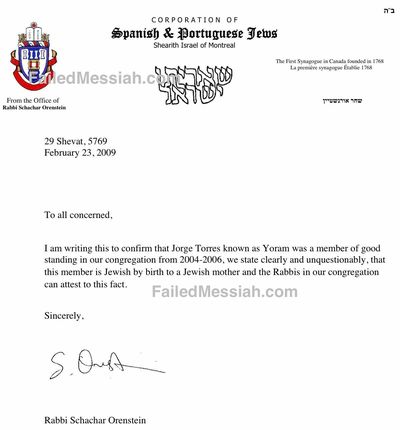 UPDATE 8 PM CST – I finally reached Rabbi Orenstein. He told me he did write a letter saying Puello had been a member in good standing of the synagogue from 2004 through 2006.
Puello paid his dues and made donations.
But Rabbi Orenstein says he never knew Puello personally because Puello left before Rabbi Orenstein became rabbi in 2007.
The letter he wrote for Puello stopped after 2004-2006. Everything afyerward, beginning with "…we state clearly…" are not his words, was not written by him and was probably added by Puello.
That said. Rabbo Orenstein said the synagogue does its best to check claims of Jewishness.
Was this done in Puello's case?
Orenstein isn't sure exactly what was done, but he will try to find out.
Here is the actual letter the rabbi wrote: 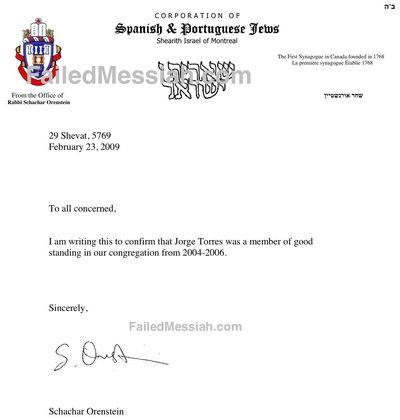 UPDATE 3 am CST – I asked Puello about the rabbi's contention that part of the letter Puello sent me is forged. Puello denied the forgery:

"I did not [forge the letter], This letter was sent by them to the Ministry in Israel for my ALIYAH. The ministry have the same letter.

Puello was affiliating as a Jew going back to at least 2004, and for these six years there is no known record of any Jewish-related fraud connected to him. By that I mean no record exists of him defrauding rich Jews, running an affinity fraud, scamming rabbis, etc.
Puello affiliated as a Jew for at least six years, the last few in the Dominican Republic.
This would seem to indicate that Jewish leaders in the Dominican Republic who claim not to know Puello – and I think specifically of Chabad's Rabbi Pelman – may not be telling the whole truth, especially when persistent claims are made that Puello regularly attended Chabad services.
Six years is a very long time to fake Jewishness.