How Rabbi Yaakov Weiss Avoided Being A Registered Sex Offender

In May 2007, Chabad's Rabbi Yaakov Weiss delivered an invocation about "ethics and morals" to the New York state Assembly. The next month, he broke state law. 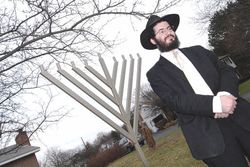 ALBANY -- On May 7, 2007, Rabbi Yaakov Weiss of Chabad of Colonie delivered an invocation about "ethics and morals" to the New York state Assembly.

"May those assembled here know of your presence, by enacting laws they do your will," Weiss told lawmakers inside the ornate chamber in a speech now available on YouTube.

Weiss requested a moment of silence. Then he asked those assembled to think of "one good deed" they would do that day.

The next month, he broke state law.

Weiss had "inappropriate physical contact" with a 13-year-old boy while both were naked inside a small pool known as a mikveh on Whitehall Road. He victimized another 13-year-old boy later in 2007 -- and told one of the boys to "just say nothing happened" to police and his mother.

The conduct was revealed when Weiss pleaded guilty to child endangerment Jan. 11 in Albany County Court.

But while his case ended in a conviction, Weiss, 29, of Loudonville, did not have to register as a sex offender. And nor has anyone else convicted of endangering the welfare of a child in New York state.

The offense, a top misdemeanor carrying a maximum of one year behind bars, is the most frequent crime committed against children based on statewide arrests. But it is not considered a sex crime -- even when the crime is of a sexual nature.

By pleading guilty to endangerment, Weiss admitted to an offense that can be committed in many ways. It ranges from "leaving a young child in a car unattended to exposing a child to drug use to extreme tortures short of homicide," according to memo for a bill sponsored by Assemblyman Joseph Abbate, D-Brooklyn, and state Sen. John Flanagan, a Long Island Republican.

Their proposal, yet to escape either the Senate or Assembly, would require endangerment offenders to join the sex offender registry when their crime involves "conduct of a sexual nature" or "sexual behavior," the memo states. "These acts are no different than many of the crimes which require an offender to register. However because of this gap in the law, many sex offenders elude the important safeguards for society."

In the Weiss case, an indictment initially alleged he had sexual contact "consisting of placing his penis in contact with said child's buttocks." When he pleaded guilty, the issue of registration appeared to play a part. His attorney, Arnold Proskin, told Judge Stephen Herrick, "I explained to the rabbi that he does not have to register as a sex offender."

Reaction to his plea, which includes up to 60 days in jail, was fierce. On a Times Union crime blog, several readers demanded to know why Weiss avoided having to register as a sex offender or receive a more-severe penalty. But Weiss faced a misdemeanor indictment that carried a maximum penalty of two years in jail for two counts each of endangerment and sexual abuse. While a conviction for sex abuse would have required he register as a sex offender, he had to be convicted first.

A prosecutor noted the plea deal, which spares the court the time and expense of a trial, enabled Weiss to admit to his activity while also sparing the boys from testifying.

Assemblyman Joseph Lentol, a Brooklyn Democrat who chairs the Codes Committee, which handles crime legislation, said many young victims are reluctant to testify in sex cases. If a defendant refuses to plead to an offense that requires registration as a sex offender, it forces prosecutors to take the case to court, where they could lose, he said.

Lentol did not expect the law to change. To do so, he said, would tie the hands of prosecutors.

"Sounds simple. Just restrict the plea ... you go to court and you lose," Lentol said in a phone interview. "It is very concerning ... the answer is not to tie the hands of the prosecutor so he can't get a conviction at all."

How Rabbi Yaakov Weiss Avoided Being A Registered Sex Offender

In May 2007, Chabad's Rabbi Yaakov Weiss delivered an invocation about "ethics and morals" to the New York state Assembly. The next month, he broke state law.
Failed messiah was established and run in 2004 by Mr. Shmarya (Scott)Rosenberg. The site was acquired by Diversified Holdings, Feb 2016.