How Rabbi Balkany Got Busted

“He sells access,” said an officer at a national Orthodox Jewish group who spoke on the condition of anonymity because he was “afraid of getting into a fight with Rabbi Balkany.…His base of power is that he’s feared, he’s respected and he’s very, very good at what he does. There are lots of people out there who take money and don’t deliver. He takes money and delivers.” 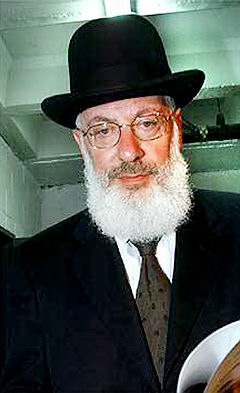 Rabbi Milton Balkany, the director of a Brooklyn Jewish day school, was on the phone last month with a proposition for a man he had never met, the president of a giant Connecticut hedge fund, SAC Capital Advisors.

The matter required tact. The rabbi, who often counsels Jewish inmates, had recently met a prisoner at the Otisville Federal Correctional Institution, a prison in Orange County, N.Y., who had told him that the hedge fund had been trading on illegal information. Rabbi Balkany was calling now, the government contends, to make a deal: $4 million for two religious schools in Brooklyn — one of them his own — in exchange for the prisoner’s silence.

“I would probably be a little more comfortable just, you know, seeing you face to face because not everything — even though it’s legal and nothing improper — not everything is for a telephone,” he reassured the fund’s president, according to an excerpt of a transcript of the recorded call.

When the president asked outright what the payments were for, Rabbi Balkany did not mince words. According to the excerpt, he said: “You can go to sleep completely comfortable, without any worry. That’s what I can tell you.”

What the rabbi didn’t know was that the man he thought was the hedge fund president was, in fact, a federal agent, and that his delicate proposition — and several previous calls — had been captured on tape. A few weeks later, he met the hedge fund’s actual general counsel, who handed him a pair of corporate checks: one for $2 million and another for $1.25 million. Hours after trying to deposit them on Thursday at a Citibank branch in Borough Park, Brooklyn, he was arrested, the government said.

He was charged with wire fraud, extortion, blackmail and making false statements.

The allegations, if true, would be one more colorful chapter in the vivid life of Milton Balkany, who was once known as the “Brooklyn Bundler” for the vast sums of money he raised for politicians — most of the Republican bent — from Rudolph W. Giuliani to George W. Bush.

Rabbi Balkany has given benedictions to the United States Senate and the House of Representatives (“I stand here today among the jewels of our nation”) and, as his lawyer, Benjamin Brafman, once said, “There are not a great many Orthodox men in Borough Park who can pick up the phone and get just about any United States senator to take the call.”

Mr. Brafman, who had just returned from Los Angeles when the rabbi was arrested, had little to say about the current case, but said Rabbi Balkany “has done a lot of good for many people.”

“I’ve just started to review the allegations,” he added, “and I’m hopeful that we will be able to demonstrate that the charges are defensible and that his motives were not corrupt.”

Working from the Bais Yaakov school in Borough Park, Rabbi Balkany transformed family connections — he married into the Rubashkin kosher meat dynasty — and an exceptionally avid personality into something of a fund-raising powerhouse. Though his clout has diminished in recent years due to the Democrats’ ascent, in the past he enjoyed access to the likes of Bob Dole, the former Kansas senator, and he and his sprawling family have contributed large amounts to Congressional candidates in states from Utah to Virginia.

“He sells access,” said an officer at a national Orthodox Jewish group who spoke on the condition of anonymity because, as he put it, he was “afraid of getting into a fight with Rabbi Balkany.”

“He plays right up to the edge and sometimes he falls over,” the officer said. “His base of power is that he’s feared, he’s respected and he’s very, very good at what he does. There are lots of people out there who take money and don’t deliver. He takes money and delivers.”

In 2003, the rabbi was arrested on charges of misappropriating $700,000 in federal housing grants, parts of which wound up, the authorities say, in the bank accounts of companies where his relatives had interests and other parts of which surfaced in the form of personal checks made payable to “Rabbi Balkany.” While that case was eventually dismissed, he suffered the indignity of having The New York Post, in several articles, refer to him as “The Robbi.”

Jonathan Gasthalter, a spokesman for SAC Capital, declined to comment on the case. But federal prosecutors say it began last month when SAC’s chief lawyer reached out to the United States attorney’s office in Manhattan, saying that Rabbi Balkany had called with “specific information” about the fund that could, according to a criminal complaint released this week, be used to damage its reputation.

Rabbi Balkany presented his motives as pure: he and the fund’s manager were “co-religionists,” the complaint says, and Rabbi Balkany “did not want to see him get hurt.”

Still, such purity had a price, the complaint contends, and thus began a fevered round of negotiations — much of it caught on tape — in which the rabbi can be heard protesting that he is “not here to threaten” and is certainly not “a holdup man.” Consider, the complaint quotes him as saying, how much money it would cost the fund if it had to defend itself against charges of insider trading: $20 million? $30 million?

As for the $4 million he himself was requesting, he said, “I don’t consider it a lot of money.”

How Rabbi Balkany Got Busted

“He sells access,” said an officer at a national Orthodox Jewish group who spoke on the condition of anonymity because he was “afraid of getting into a fight with Rabbi Balkany.…His base of power is that he’s feared, he’s respected and he’s very, very good at what he does. There are lots of people out there who take money and don’t deliver. He takes money and delivers.”
Failed messiah was established and run in 2004 by Mr. Shmarya (Scott)Rosenberg. The site was acquired by Diversified Holdings, Feb 2016.