« Psychiatrist Will Evaluate Rubashkin In Jail | Main | Chabad And Messianism »

Has Obama Earned Your Distrust?

“In the Orthodox community Obama is paying the price for the Crown Heights pogrom and his father’s religion as much as he is for his policies toward Israel, and that’s a shame.” 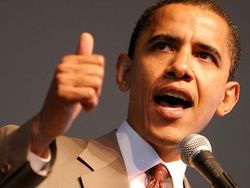 Pundits may wonder whether buyer’s remorse has set in among the 78 percent of Jews who voted for President Obama in the 2008 election, but one segment of the Jewish population never made the purchase in the first place.

And one year into the president’s term, it doesn’t seem like they’ll be buying anytime soon.

Prior to the election in 2008 a poll conducted by the American Jewish Committee revealed that only 13 percent of Orthodox Jews said they would support Obama. After the election, the Orthodox Union compiled a short-list of precincts with “High concentration of Orthodox voters.”

Lakewood, NJ voters favored the McCain-Palin ticket by a margin of 69 percent to 31 percent for Obama-Biden. The Lawrence Middle School polling station in Lawrence, NY recorded 81 percent of people voting for McCain, the highest percentage on Long Island. While the numbers are not too shocking given the tendency of Orthodox voters to support Republican platforms, anecdotally it seems as if the president is faring even worse in the Orthodox community than might otherwise be expected.

He lamented the attention the current administration gives to organizations like J Street and Americans for Peace Now.

“Ignoring mainstream Orthodox organizations bolsters the perception that the Obama administration has a different world view than ours,” said Bennet.

A modern Pharaoh?
One local Jewish weekly recently compared President Obama’s relationship to the Jewish community to the Egyptian Pharaoh’s relationship with the Jews of his time.

“Not unlike Pharaoh, the goal was to deal with them wisely and expeditiously, that is before anyone had a chance to really understand what was going on,” the paper wrote.

The main issue of contention between Orthodox Jews and Mr. Obama, unsurprisingly, is Israel.

“Because so many Orthodox Jews have relatives and friends in Israel and so on, that is not surprising that they go together,” explained Jonathan Sarna, the Joseph H. & Belle R. Braun Professor of American Jewish History at Brandeis University, who is currently on sabbatical in Israel.

“Israeli polls were something on the order of 80 percent distrust for Obama and have been from the start. I think that for many Orthodox Jews the central issue on which they support or oppose the president is really Israel.”

Nathan Diament, director of the Institute for Public Affairs of the Orthodox Union, said that he had felt strong sentiment against the administration in the communities he’s visited.

“In the context of the Orthodox where the majority in the community identify with the settlement movement in Israel, there’s a great deal of tension, let alone opposition, to the president’s efforts last year to push Israel to undertake a settlement freeze,” he explained by phone.

Diament stressed that while the issue of settlements was tense, relationships between Israel and America are strong as they had been.

“As Michael Oren, Israel’s ambassador to the US, has said publicly, and I would agree with, there are many other aspects of the Israel-US relationships that are as good, if not better, than they have been for many years. It’s a multifaceted relationship that includes military cooperation, economic trade, partnerships, intelligence sharing and many other things, and all of that is going full speed ahead the way it was during the last administration,” Diament explained. “The number one issue of the Israel government is the nuclear threat of Iran, so far, and I underscore so far, the Obama administration and the Netanyahu government have been working closely together and are very much on the same page. Looking back on 2009, Obama and Netanyahu were working together in a way that the community ought to appreciate…”

“Orthodox see the glass as half-empty, they shouldn’t ignore the glass half-full.”

Half-full or half-empty?
David Singer, director of research for the American Jewish Committee, disagreed with the notion of specific sentiment inside the Orthodox population against President Obama. Any sentiment was simply part of the political give-and-take, he said.

“There are not particularly strong feelings one way or the other,” Singer explained. “Because Orthodox Jews tend to be more to the right of the political spectrum there’s a certain measure of distance, but you don’t sense a sharp differentiation. There’s some disapproval but these are normal political difficulties.”

Some of those who see a conflict wonder if there are racial undertones to dislike of the administration.

“I think there are strong anti-Obama feelings in the Orthodox community, in part because his father was a Muslim and in part because Obama is viewed as being far less pro-Israel as George W. Bush. And then there is the race issue, which is especially strong among Charedim, perhaps because of years of living in urban areas that border on or are part of large concentrations of poor blacks,” said Shmarya Rosenberg, the blogger behind Failed Messiah.

“In some ways, in the Orthodox community Obama is paying the price for the Crown Heights pogrom and his father’s religion as much as he is for his policies toward Israel, and that’s a shame.”

For the Charedi population, the adage coined in the 1950s by essayist Milton Himmelfarb, that Jews earned like Episcopalians (then a largely wealthy minority) — and voted like Puerto Ricans (then a largely poor minority) has been reversed, according to one political consultant. Ezra Friedlander, CEO of the Friedlander Group a public and government relations group based in DC and New York, and who campaigned for Obama, said that he’s seen communities voting against their own interests.

“I tell my Charedi friends that if the big health insurance companies are against the plan, then you should be for it, since you know the vast majority of our community cannot afford a health plan that costs $15,000 a family,” he said.

Friedlander offered an introspective take on the matter of race and Orthodox Jews feelings about Mr. Obama.

“The Chareidi community feels more comfortable with an African American as opposed to a secular Jew, even an Orthodox Jew,” asserted Friedlander.

“Someone who has zero connection to the community, they have much greater chances of shaping that person’s perspective of them and their community and the issues of the greatest importance to them, as opposed to someone who shares a religious background or cultural background.”

As for whether this is ‘good for the Jews,’ the jury is still out.

“I think that it’s probably to the benefit of the Jewish community that we have two parties vying for the Jewish vote and they can’t take it for granted,” said Sarna. “When we had a Republican president who was advised to ‘Eff the Jews, they don’t vote for us,’ that was clearly a bad thing from the point of view of the Jews. “

“Most know that the two presidents in recent decades who were most disliked by the Jews, Carter and HW Bush, were one-term presidents. Mr. Obama, if he wants to be a two-term president, he will remember that.”

Has Obama Earned Your Distrust?

“In the Orthodox community Obama is paying the price for the Crown Heights pogrom and his father’s religion as much as he is for his policies toward Israel, and that’s a shame.”
Failed messiah was established and run in 2004 by Mr. Shmarya (Scott)Rosenberg. The site was acquired by Diversified Holdings, Feb 2016.