Rabbis Elyashiv and Kanievsky are said to support ban.

Bagel, no lox?
By Michael Orbach • The Jewish Star 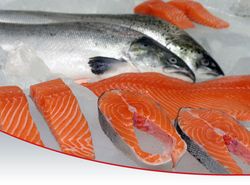 Anisakis, a roundworm, typically does not grow to more than two centimeters long and about the width of a human hair, but the parasite may cause big problems for kosher fish lovers.

Some charedi rabbonim in Israel as well as a number of their American counterparts have ruled that the fish that the parasites inhabit, including wild salmon, flounder and halibut, can no longer be considered kosher. The Orthodox Union, the largest kashrut certifying organization in the world, does not believe such a ban is required or even necessary.

At a meeting in a Brooklyn shul on Feb. 18th, Rabbi Moshe Karp (no kidding) of Modi’in Illit in Israel forcefully expressed his position in Yiddish: on account of the roundworm, he believes that a ban on salmon and the other fish is an absolute necessity, according to rabbis who attended the meeting.

He is raising a variety of objections that would seem to contradict the Gemorah, which explicitly states that worms found in fish do not make a fish treif (non-kosher) and even allows such worms to be eaten. Karp said that he believes that the roundworm is a different parasite than the one mentioned in the Talmud; that pollution has caused the roundworm to mutate and grow larger; and that the anisakis has changed its instinctual behavior and now matures before it enters the body of the fish.

The meeting, which was accessible to the public via teleconferencing, has left many kashrut experts fishing for an appropriate response.

The Gemorah states that the “tolayim” (bug) are generated inside the fish “minei gavli,” which literally means generated in the flesh. Rashi and later commentators explain the Talmudic term to mean that a stage of the parasite’s growth is within the fish, and therefore it not considered an insect but a part of the fish. This opinion is confirmed in the Shulchan Aruch (Yoreh De’ah 84:16).

Karp claims that he has spoken with Israeli gedolim including HaRav Yosef Sholom Elyashiv and HaRav Chaim Kanievsky and that they have agreed to support a ban. Karp has experience in such matters: recently, he was one of the figures behind a ban on Israeli websites that catered to the Chareidi public. Several of them have shut down.

Generally, there seems to be a difference of opinion between kashrut authorities in Israel and America, according to Rabbi Sholom Fishbane of the Chicago Rabbinical Council. He is the director of the Association of Kashruth Organizations, which organized the teleconference.

Concerns about anisakis are recurring.

“Every five years they discover this problem,” said Rabbi Dovid Cohen, administrative rabbinic coordinator for the Chicago Rabbinical Council. Rabbi Cohen said that Rav Moshe Feinstein zt”l once considered writing a teshuva (answer) explaining why salmon is kosher but did not, out of concern that it be used after his death to find justifications to prohibit the fish.

This time around, supporters of a ban are not floundering. According to anecdotal reports, a ban is being considered by kashrut authorities in Monsey and Lakewood. Chevra Mehadrun, the Kashrus Advocacy of Rockland, has released a bulletin announcing that wild salmon, hake, flounder, sol, halibut, sea bass, red perch, scrod, pollock, cod and butter fish are no longer considered kosher. So far, however, mainstream Orthodoxy has not taken the bait.

“It’s nothing to carp about,” quipped Rabbi Chaim Goldberg, rabbinical coordinator of the Orthodox Union. He said that the OU follows the p’sak halacha (ruling) of Rabbi Yisroel Belsky, the Rosh Yeshiva of Yeshiva Torah Voda’as, who holds that, based on the Gemorah, “the question arose approximately 2,000 years ago and was answered at that time.”

Rav Belsky is said to believe a ban is not warranted — attempts to reach him by phone were not successful. He is scheduled to visit Israel within the next two weeks to discuss the issue with leading rabbonim.

Rabbi Yoel Schonfeld of the Vaad HaRabonim of Queens said that the organization follows Orthodox Union guidelines and had no plans to ban wild fish.

“I don’t believe the ban will become widespread,” he said, warning that if it does, “it could be catastrophic” to restaurateurs and non-meat eaters.

The Vaad of the Five Towns is following the OU’s lead, as well.

According to Dr. Ted Myers, Alaska’s chief fish pathologist, the science behind the proposed ban is fishy.

There is no new parasite, he explained.

“Anisakis has been around since before man. It’s one of nature’s greatest achievements as a parasite. It’s pretty effective,” he said.

The worm matures from larvae into the third juvenile stage of its development in the visceral cavity of a fish. The worm only reaches its full development in its definitive host, a warm blooded marine mammal, a narrative that largely confirms the Talmud’s take.

Myers also said any large-scale changes in the animal are unlikely.

“As far as pointing to something in the literature and saying it’s increased the prevalence, no one can say. The anisakis worms are not that important; there’s not a lot of research regarding worms and fish. People are more interested in more exotic things like viruses.”

Dr. Isaac Wirgin, an associate professor at environmental medicine at NYU School of Medicine and a member of the Young Israel of New Rochelle, said that the worms are just a part of life.

“My wife tells me not to eat strawberries in Brooklyn. I’m not concerned about the worms in my lettuce. I eat a lot of things that are infected with things. Especially fish,” he said.

The parasites may be more common now because of pollution, Wirgin suggested, which would weaken the immune system of the fish; or because of an increase in the seal population, which is a host to the worm.

According to the OU’s Rabbi Goldberg, at the end of the meeting in Brooklyn, a chassidishe rebbe in attendance asked Karp if he was implying that gedolim of yore ate treif. Rabbi Goldberg said that Karp explained, “they did not know what we know and that the fish is assur (forbidden) because we know how the bug works.”

“I asked him to please tell me the name of the Jew or gentile that clarified it for us and where is this research, and when was it put out,” recalled Rabbi Goldberg. He believes the idea of a ban will soon be sleeping with the fishes. “If you say something is based on science then you have to provide the science. You might be the greatest of Torah scholars; show me your research or the research you’re basing your opinion on. Don’t say just because you’re great in Torah I should take your word for it.”

Rabbis Elyashiv and Kanievsky are said to support ban.
Failed messiah was established and run in 2004 by Mr. Shmarya (Scott)Rosenberg. The site was acquired by Diversified Holdings, Feb 2016.