The Rockland County Board of Health once again has fined the organizer of a Jewish ritual that involves live chickens for violating the local sanitary code, but if history is a guide, it won't see that money any time soon. 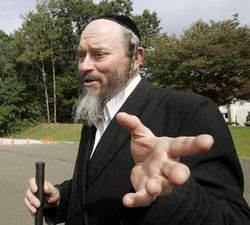 RAMAPO — The Rockland County Board of Health once again has fined the organizer of a Jewish ritual that involves live chickens for violating the local sanitary code, but if history is a guide, it won't see that money any time soon.

This is the third year in a row that Moshe Lefkowitz of Monsey has been fined for not properly cleaning up chicken entrails, feces, carcasses, feet and blood in kapparot ceremonies in Monsey.

On Wednesday, Lefkowitz was slapped with a $6,250 penalty.

In 2008, Lefkowitz and Congregation Birchos Yosef, owner of the property where the ceremony was held, had a $6,500 penalty levied against them.

It, too, remains unpaid.

"What disturbs me about this case is the obvious intent to say, 'Here, come and get me over and over and over again,' " Health Board member Clement Osei said.

Neither Lefkowitz nor his lawyer attended the meeting, held Wednesday at county offices in Ramapo.

In September, Lefkowitz told The Journal News that he wouldn't pay the fines because he believed the county Health Department was trying to squeeze money from him. He said he had tried to comply with the rules as much as possible, but that the county had unrealistic expectations.

Member David Kraushaar said he was outraged that two people in Lefkowitz's family, including his son, had accused the Health Department of "blatant anti-Semitism" in a letter after a hearing in December. Lefkowitz, who had asked for the Dec. 3 hearing to be rescheduled, did not attend.

"This is not a question of anti-Semitism," Kraushaar said. "This is clearly a question of following the laws of the country." He said that Lefkowitz not showing up to the board meeting was a "total slap in the face."

County Health Commissioner Joan Facelle said Lefkowitz had agreed to a payment plan in 2008. He made seven payments of $200 each, but didn't follow through on the $1,600 lump sum payment.

The outstanding fines will be pursued in court, Facelle said.

Lefkowitz did not respond to a telephone message left for him at his home.

Health inspector Kevin Mackey said he, another Health Department official, a representative from the County Executive's Office and Rabbi Jacob Horowitz had met with Lefkowitz and his son, Shmuel, a few weeks before the ceremony and that they had agreed on specific steps to ensure that the problems from past years would be avoided.

"He said he would comply," Mackey told board members.

About 11,000 chickens were used at the kapparot ceremony — the event involves circling live chickens over the heads of worshippers and later slaughtering the chickens as a means of atonement — from Sept. 21 to 29. Tickets to it cost $10 each.

On Jan. 26, Lefkowitz was found guilty by an independent hearing officer of nine violations, including leaving chicken feces, feathers and a pile of chicken feet in the parking lot; leaving trash, plastic bags and plastic gloves on the ground; having roll-off trash bins without lids on the site; and having a bad odor at the location.

The county's concern stems from the large volume of chicken blood and feces that may have entered storm drains, which typically discharge into local waterways, serving drinking water sources.

At the hearing in December, 10 people spoke in support of Lefkowitz. They testified that good-faith efforts were made to keep the site clean. Disposable plastic tarps were used to cover the ground. After the hearing, a petition signed by more than 100 people saying the ceremony was done well was submitted to the hearing officer.

At Wednesday's board meeting, Thomas Micelli, the county's director of environmental health, said the sanitary conditions had been better than in past years.

A vast majority of the chickens were taken to Orange County to be slaughtered, but a couple of hundred were killed at the site.

Health Board President Jeffrey Oppenheim asked if the county should focus on the Jewish boys school where the ceremony took place to make sure Lefkowitz complied with county health laws.

The county has no authority over the religious ceremony or the slaughtering of the chickens.

The owners are responsible for environmental violations that occur on their property, whether they are aware of them or not, Oppenheim said. The school was fined in 2008, but not named this year. Penalties could still be levied against it, officials said.

The Rockland County Board of Health once again has fined the organizer of a Jewish ritual that involves live chickens for violating the local sanitary code, but if history is a guide, it won't see that money any time soon.
Failed messiah was established and run in 2004 by Mr. Shmarya (Scott)Rosenberg. The site was acquired by Diversified Holdings, Feb 2016.