Escape From The Haredim

The community of ultra-Orthodox Jews in Israel is half a million strong and growing. They live in a parallel universe cut off from the modern world in tight-knit communities where everything revolves around religion. Only a few dare to abandon this life -- and the price for doing so is high. 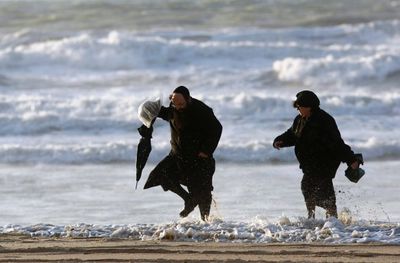 The community of ultra-Orthodox Jews in Israel is half a million strong and growing. They live in a parallel universe cut off from the modern world in tight-knit communities where everything revolves around religion. Only a few dare to abandon this life -- and the price for doing so is high.

When she left, she left everything behind -- even her name. She no longer wanted to be known as Sarah, the name her parents had given her. She'd felt imprisoned by that name for too long; it made her feel different and subject to laws that others imposed upon her. So, she started her new life with a new name, Mayan, the Hebrew word for "source."

It's been seven years since Mayan "landed on planet Earth," as she puts it. But the 27-year-old doesn't feel completely at home here yet. She's a young, modern Israeli woman. Still, despite the dragon tattoo on her shoulder and the loose top offering occasional glimpses of her bra, there are always some moments that betray her past. For example, when her friends talk about old TV series, classic pop music or their first schoolyard crushes, Mayan can't join in. Until she was 17 years old, Mayan lived in another world, a world where those things simply didn't exist.

A Life Completely Focused on Religion

The "parallel universe" Mayan used to live in has around 550,000 inhabitants. It is the world of the Orthodox Jews in Israel, whose adherents live in tight-knit communities where everything revolves around religion. They radically shield themselves from modern life. Television is frowned upon, as is non-religious music, telephones and the Internet. News that is important to the community is disseminated via notices posted on walls. Boys and girls go to school, but their education is primarily focused on religion.

"Everyone can read and write, but math was over after simple multiplication," Mayan says. "When I left school, I didn't even know what New York was, and I had never even seen a dog because nobody kept any pets."

According to Irit Paneth, it is this lack of education, in particular, that makes it almost impossible for doubters in these communities to break out of the inflexible corset of their belief. Paneth is a member of Hillel - The Right To Choose, an organization that helps those leaving the Orthodox faith start a normal life. "We are not against the religion," Paneth explains. "But Ultra-Orthodoxy is more like a cult that intellectually cripples children in the name of religion." For most young people who break away from the Orthodox life, she explains, it's like leaping off a cliff into the unknown. "They come without money, without education in the classical sense, without any chance of employment," Paneth says.

One of the Fastest Growing Groups in Israel

According to government estimates, ultra-Orthodox Jews make up one of the fastest-growing groups in Israeli society. By 2025, the government forecasts that roughly 22 percent of school-age Israeli children will come from one of the groups with strong religious beliefs.

Over the 19 years it has been operating, only around 2,000 defectors have turned to Hillel. "There are tens of thousands who have doubts and want out," Paneth says. But only a small number are ready and willing to make the sacrifices that defection demands. For example, most families completely break off contact with defectors. "Some even hold wakes," Paneth says, "as if the daughter or son has actually died."

Mayan grew up in Beitar Illit, an Orthodox settlement just south of Jerusalem in the Judean Mountains of the West Bank. There, men wear black suits and wide-brimmed hats. The women -- whose style of clothing is intended solely to denote chastity -- wear high-necked blouses, long skirts and often a head scarf. Likewise, the men don't hold jobs but, instead, devote their lives to studying the Bible. The women feed their families and often raise up to 12 children.

Mayan's childhood finished when she was seven, when her widowed mother remarried. From then on, she had to wear socks and long pants to bed under her nightgown -- even in the summer -- lest the bed cover slip off and expose here bare skin to her stepfather. And since her stepfather was not a blood relation, he was not allowed to touch her. In fact, he barely spoke with her, either.

No Preparation for Puberty

Puberty was a time of great anxiety for Mayan. As her breasts began to grow, Mayan thought she had cancer. The taboo about anything physical was so great that she snuck off to the doctor rather than having to ask her mother what was happening. Her first period brought renewed panic and shame. Mayan hid her dirty undergarments. And when her mother found them, she was scolded rather than given an explanation. What if her stepfather had found her dirty panties?
Mayan first began to doubt her lifestyle when she switched to a school in central Jerusalem. She saw fashionably dressed young people and noticed that the boys "from the other world" looked at her with interest. At 14, she hatched a plan together with some other curious school friends. They told their mothers that there was a study-group meeting. But then the girls used money they had earned babysitting to take the bus to Luna Park, an amusement park in Tel Aviv. Even today, Mayan beams when she talks about the lights and the music. "I felt like Cinderella," she says, "like I was in a dream."

Still, the second expedition Mayan organized with her girlfriends ended in disaster. They took a trip to the beach, but their fresh tans gave them away once they arrived home. The result -- for Mayan, at least -- was a three-year odyssey through various ultra-Orthodox reformatories and foster families. Her insubordination had to be driven out of her -- if need be, by lies. "We were contantly told that the secular world was only waiting to turn us into prostitutes or slaves," Mayan explains, "that there was nothing but drug addiction waiting for us out in the modern world."

With help from Hillel, Mayan eventually managed to make the leap out of her religious life. The organization helped her financially so she could go to a boarding school and get her high school diploma. Mayan then completed the obligatory military service that all Israeli women must perform and, today, she is studying special education in college. She no longer has any contact with her family, and she suspects that her sisters have paid a high price for her defection. "When my sisters' marriages are arranged," Mayan says, "they won't get the men they deserve."

'Staying Would Have Meant Death'

Every week, 25-year-old Shimy Levy gets to re-pay the price for abandoning his religion. The rabbies in the ultra-Orthodox divorce court granted him two hours a week with his two children. And whenever they are up, Levy realizes once more the price of his freedom. "But leaving was still the right thing to do," Levy says. "Staying would have meant death -- and I couldn't kill myself for the sake of my children."

Levy grew up in the Orthodox faith, and -- like Mayan -- he began to have doubts when he reached puberty. The rules of the religious school he was supposed to spend the rest of his life in were increasingly getting on his nerves. "With the help of the Bible," he says, "they manage to control every small detail of everyday life." Then he begins to count the ways: In the morning, you have to put the right shoe on before the left shoe. Then the shoes had to be laced up the opposite way -- left shoe first, then right. On the Sabbath, you could only eat fish if you managed not to touch any bones. At most, a young man was only allowed to meet his potential bride in an arranged marriage twice -- and then only for an hour during a chaperoned conversation. After that he had to decide whether he would marry her.

Eventually, Levy bought a small radio with earphones. At night, under the covers in the communal sleeping hall of the yeshiva -- the male-only religious institution where he studied -- he would eavesdrop on the outside world. But, like Mayan, he was caught and spent time in reformatories. At 20, he was married -- in another attempt to tame his desire for freedom. For four years, he played the role of the strictly religious husband and father before coming to the decision that he couldn't live like that any longer. He confessed to his wife that he had lost his faith, and he asked for a divorce.

'If God Exists, He Wouldn't Want This'

Then, without any particular regrets, he cut off the long, traditional sidelocks he had worn his whole life. "It was already clear to me that all of these rituals were just empty gestures," he says.

For Levy, the last year has been one long attempt to catch up on what he's missed. At breakneck speed, he has developed his taste in music -- everything from Abba to techno -- and he's gone from a being a television novice to owning an iPhone. His first sneakers, his first movie, his first pork chop. "Every day I tick off another thing that was previously withheld from me," Levy says. He is already concerned about the indoctrination that his children will be exposed to. "Every time I see them," he says, "they tell me that the whole family is praying for my return to the faith."

Irit Paneth of Hillel hears stories like those told by Mayan and Levy with mixed emotions. Of course, she says, she is as proud "as any mother" when her charges find their way in the modern world. "But what about the many others," she asks, "the ones not strong enough to tear themselves away?" They have to adapt to a life of pretending to be pious, she explains, and of following the rules of a religion they don't believe in. "If God exists," Paneth says, "he wouldn't want this."

Posted at 01:01 AM in Haredim, Israel, Skepticism & Former Haredim | Permalink

Escape From The Haredim

The community of ultra-Orthodox Jews in Israel is half a million strong and growing. They live in a parallel universe cut off from the modern world in tight-knit communities where everything revolves around religion. Only a few dare to abandon this life -- and the price for doing so is high.
Failed messiah was established and run in 2004 by Mr. Shmarya (Scott)Rosenberg. The site was acquired by Diversified Holdings, Feb 2016.