Distribution Of Income By Religions In The US

How does Judaism rate? 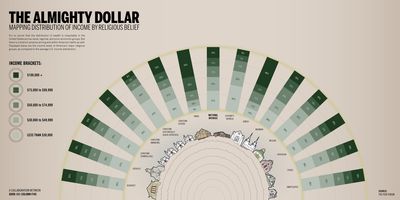 PDF:
Download Distribution of Income by Religion in US
Source.
Notice that those earning less than $30,000 are very underrepresented in our community. While this means more money should be available to help them, I think in reality it means poorer Jews feel very out of place inside the Jewish community.
And, despite what should be more than adequate funds available to help them, most poor Jews are shunted off to government programs and the public welfare system. This means poor Jews living outside of Jewish communities with high poverty rates (Williamsburg, Brooklyn, NY and Kiryas Joel, NY would be examples of Jewish communities with a high poverty rates) are likely to fare worse than Jews living in Jewish communities with high poverty rates, because the Jewish community infrastructure to help them will often be lacking.
A poor Jew in Minnesota, Indiana or even Scarsdale, NY will likely be referred by the Jewish community to county welfare offices and left to fend largely for herself.
A poor Jew in Williamsburg will get food, intensive social work help, school scholarships for children, access to employers, and other Jewish community-based services along with getting full access to county welfare programs – access that is made more complete and easier to navigate by Jewish community employees.
On top of that, higher concentrations of poor reduces the stigma of being poor, and the reverse is also true.
The Jewish community as a whole is wealthy. But I think investigation will show it spends that money in ways that do not achieve maximum benefit its most vulnerable members.
Perhaps that is because we cannot attach plaques to the backs of our poor.

Posted at 11:01 AM in Ethics, Jewish Leadership | Permalink

Distribution Of Income By Religions In The US

How does Judaism rate?