"Seven or eight years ago, I was accused of wrongdoing. The government had to back off then," Balkany said after a hearing late Thursday. "This thing is much more ridiculous."

NEW YORK -(Dow Jones)- The dean of a Hebrew day school in Brooklyn was arrested and charged Thursday in an alleged scheme to extort $4 million from a Connecticut hedge fund. 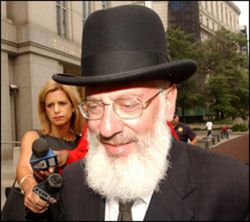 Rabbi Milton Balkany, the dean of the Bais Yaakov day school in the Borough Park section of Brooklyn, was charged with wire fraud, extortion, blackmail and making false statements.

Balkany, 63 years old, faces up to 20 years in prison on the wire fraud count.

"Seven or eight years ago, I was accused of wrongdoing. The government had to back off then," Balkany said after a hearing late Thursday. "This thing is much more ridiculous."

Balkany was accused in 2003 by prosecutors from the U.S. Attorney's office in Manhattan with misappropriating federal grant money, but those charges were dropped after he entered a deferred prosecution agreement in 2004, according to court records.

On Thursday, prosecutors from the U.S. Attorney's office in Manhattan alleged Balkany, between December 2009 and February 2010, contacted the lawyers for a Connecticut hedge fund, claiming an inmate to whom he was a spiritual advisor told him the hedge fund received inside information in 2004 and in 2005 to make profitable trades in at least six stocks.

Balkany allegedly told the hedge fund's lawyers that he would instruct the inmate not to talk to the government if the fund paid $2 million to the Bais Yaakov school and $2 million to another school, prosecutors said.

He allegedly told the lawyers that prosecutors and the Federal Bureau of Investigation were aware the inmate had this information and were anxious to talk with him in mid-December 2009, prosecutors said.

Balkany allegedly told the fund's lawyers that, if they didn't pay, he would attempt to help the inmate reduce his sentence by allowing him to speak with government officials, prosecutors said.

At the same time, Balkany allegedly contacted the U.S. Attorney's office in mid-January 2010 to induce prosecutors to contact the inmate in order to put additional pressure on the hedge fund, prosecutors said. During those conversations, he allegedly made false statements, the government said.

According to court documents, several conversations between Balkany and the fund's lawyers were recorded.

Balkany said after Thursday's hearing that he was trying to help an inmate reduce his sentence, but declined to name the inmate.

"Seven or eight years ago, I was accused of wrongdoing. The government had to back off then," Balkany said after a hearing late Thursday. "This thing is much more ridiculous."
Failed messiah was established and run in 2004 by Mr. Shmarya (Scott)Rosenberg. The site was acquired by Diversified Holdings, Feb 2016.