« Cops: $4 Million Diamond Heist Staged | Main | Man Connected With Americans In Haiti Makes His Case While On The Run From The Law »

Critics of Mazar, who asked not to be named, said yesterday they very much doubted the accuracy of her connections between the archaeological finds and the Bible. "She often fires an arrow and then marks the target. What she's telling is a myth," a skeptic said. 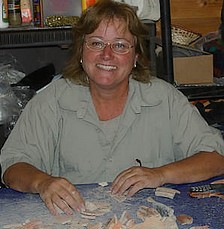 A team of Israeli archaeologists has announced the discovery of a massive wall they say dates to the 10th century BCE in Jerusalem's Ophel Park on the slope between the Temple Mount and the village of Silwan. The dig director, Dr. Eilat Mazar, dates the wall according to potsherds found nearby to the period of King Solomon and the major period of construction in Jerusalem in the First Temple period, as described in the Bible.

The dig is a joint project by the Hebrew University, the Israel Antiquities Authority and the Israel Nature and Parks Authority.

Along with the wall, which is 10 meters high and 70 meters long, other structures were found, including a monumental gatehouse and a tower. According to Mazar, the wall is additional proof of the accuracy of the Bible's description of the grandeur of the period of David and Solomon.

According to 1 Kings 3:1, Solomon brought his royal Egyptian wife "into the city of David, until he had made an end of building his own house, and the house of the Lord, and the wall of Jerusalem round about."

"If we take the type of building and the finds and examine them in the light of what we know from the Bible, it certainly goes together well," Mazar says. "It suits the biblical story and upgrades our ability to propose an association to the wall of Jerusalem that King Solomon built. It's not wise to relate to archaeology without the biblical text. It is very possible that the Bible, like stories of dynasties, preserves a kernel of truth," she says.

The artifacts found near the wall are seen as further proof of its construction during the Israelite period. An inscription found on a fragment of a jug reads "of the overseer of the ba...", which Mazar believes refers to the "overseer of the bakers." Other fragments bear the words "of the king." Clay seals were also found bearing dozens of names.

According to Mazar, the wall, which has been uncovered over the past few months, was built on a very high level in terms of construction and engineering, and was perched on the natural rock scarp in a way that protected the Temple Mount from the east.

"This is the first time a structure has been found that could conform to descriptions of King Solomon's construction in Jerusalem," Mazar says.

The discovery highlights an ongoing scholarly controversy about the nature of the period of David and Solomon. Mazar belongs to a school of thought that finds archaeological underpinnings to the biblical stories and accepts the stories as historical. Other scholars, many from Tel Aviv University, say the Bible represents myths and the political interests of its writers, arguing that the monarchy of David and Solomon was not the regional power the Bible describes. Critics of Mazar, who asked not to be named, said yesterday they very much doubted the accuracy of her connections between the archaeological finds and the Bible. "She often fires an arrow and then marks the target. What she's telling is a myth," a skeptic said.

Mazar, who is also a fellow at the Shalem Center, says she does her work with a Bible in one and and a spade in another:

Mazar's often Bible-inspired approach has been a source of contention between her and other more secular archaeologists.

According to Mazar herself,

I work with the Bible in one hand and the tools of excavation in the other, and I try to consider everything.

However, Israel Finkelstein and other archaeologists from Tel Aviv University have flagged concern that, regarding the city wall,

As she admits, the chronological data recovered in her excavations indicate that the sole Iron Age fortification system extending in this area was in use during the 8th−7th centuries BCE [250 to 300 years after Solomon]. However, according to the biblical sources the Solomonic city-wall must have passed here, hence [she maintains] the fortification system in question must be Solomonic in date.

The biblical text dominates this field operation, not archaeology. Had it not been for Mazar’s literal reading of the biblical text, she never would have dated the remains to the 10th century BCE with such confidence.

Mazar was also cautioned by one epigrapher following the 2008 confusion over the inscription on the Shelomit seal,

In the mad dash to report biblical artifacts to the public or connect discoveries with the most obscure persons or events reported in the Bible, there is sometimes a tendency to compromise the analytical caution that objects of such value so dearly deserve.

Mazar gets away with this because proof of malfeasance or error takes years to go through peer review.
Mazar has political aims – itself not a bad or unusual thing, especially in Israel. She also wants to validate the work of her father and grandfather, who were archaeologists before her and who held to a similar Bible-based form of the field that has since been largely disproven.
I'm not accusing Mazar of intentionally fudging data.
What I'm saying is the popular rap against Finkelstein actually applies to Mazar at least as much as it does to Finkelstein..
This latest find will most likely turn out to be more proof of that.
[Hat Tip: Yochanan Lavie.]

Critics of Mazar, who asked not to be named, said yesterday they very much doubted the accuracy of her connections between the archaeological finds and the Bible. "She often fires an arrow and then marks the target. What she's telling is a myth," a skeptic said.
Failed messiah was established and run in 2004 by Mr. Shmarya (Scott)Rosenberg. The site was acquired by Diversified Holdings, Feb 2016.