The Torah strongly condemns what it believed was the Canaanite and general regional preference for child sacrifice: 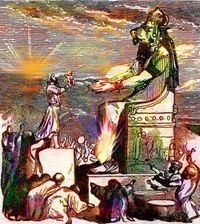 And you shall not let any of your seed pass through l'Molech, neither shall you profane the name of your God: I am the Lord.…Again, you shall say to the Sons of Israel: Whoever he be of the Sons of Israel or of the strangers that sojourn in Israel, that gives any of his seed l'Molech; he shall surely be put to death: the people of the land shall stone him with stones. And I will set my face against that man and will cut him off from among his people; because he has given of his seed l'Molech, to defile my sanctuary, and to profane my holy name. And if the people of the land do at all hide their eyes from that man, when he gives of his seed l'Molech, and do not kill him, then I will set my face against that man, and against his family, and will cut him off, and all that go astray after him, whoring l'Molech from among the people.

Most of us have learned midrashim and aggadata that echo and expand on this theme.

The bottom line is that these neighbors of the Hebrew people killed their children to please their gods, especially Molech – or did they?
A new study refutes these Biblical and rabbinic claims.
Studying child remains found in Carthage, a Canaanite-founded outpost on the North African Mediterranean shore, researchers concluded that:

"Our study emphasizes that historical scientists must consider all evidence when deciphering ancient societal behavior," Schwartz said. "The idea of regular infant sacrifice in Carthage is not based on a study of the cremated remains, but on instances of human sacrifice reported by a few ancient chroniclers, inferred from ambiguous Carthaginian inscriptions, and referenced in the Old Testament. Our results show that some children were sacrificed, but they contradict the conclusion that Carthaginians were a brutal bunch who regularly sacrificed their own children."

…Schwartz and his colleagues conclude that the high incidence of prenate and infant mortality are consistent with modern data on stillbirths, miscarriages, and infant death.

In other words, as Science Daily notes under the headline, Study Debunks Millennia-Old Claims of Systematic Infant Sacrifice in Ancient Carthage:

An examination of the remains of Carthaginian children revealed that most infants perished prenatally or very shortly after birth and were unlikely to have lived long enough to be sacrificed.

Indeed, it is possible – and this is my own conjecture – that ancient Canaanites viewed still births and infants who died of natural causes shortly after birth as acts of the gods. The gods wanted the "sacrifice" of these children and "took" them just before or closely after birth.
It may be that the cremation of these tiny bodies, as opposed to normal burial for older children and adults, was the human act of "completing" the "sacrifice" initiated by the gods.
In other words, the child sacrifice attributed to the Canaanites may have been almost entirely symbolic because the almost all of the victims "sacrificed" were stillborn or died from natural causes shortly after birth.
[Hat Tip: HaNavon.]

Posted at 11:47 AM in History, Religion, Religion & State | Permalink