Rabbi Yehuda Levin, the spokesman of the Rabbinical Alliance of America, also called on the Pentagon and Congress to stop the "sodomization" of our military and our society.

American rabbi: Homosexuality can cause earthquakes
The Dscriber 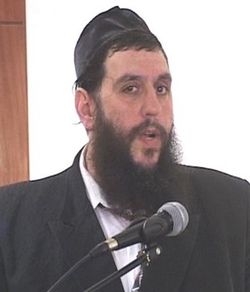 Move over Pat Robertson and make room for Rabbi Yehuda Levin, the spokesman of the Rabbinical Alliance of America. This morning, the rabbi railed against the Obama administration's "ultra-liberal" plan to allow gays and lesbians to enlist in the military , calling the proposed policy the equivalent of "spiritual rape."…

Then Levin turned Robertsonesque, stating that the sins of men cause earthquakes, such as the one that caused massive devastation in Haiti. Only instead of arguing that the Haitians long ago made a pact with Satan, as Robertson did, Levin's twist is that homosexuality can be "a spiritual cause of earthquakes."

"Thirteen months before 9/11, on the day New York City passed homosexual domestic partnership regulations, I joined a group of Rabbis at a City Hall prayer service, pleading with G-d not to visit disaster on the city of N.Y. We have seen the underground earthquake, tsunami, Katrina, and now Haiti," Yehuda said in the media advisory issued via the Christian Newswire service.  "All this is in sync with a two thousand year old teaching in the Talmud that the practice of homosexuality is a spiritual cause of earthquakes. Once a disaster is unleashed, innocents are also victims just like in Chernobyl. We plead with saner heads in Congress and the Pentagon to stop sodomization of our military and our society. Enough is enough."

"When Americans are suffering economically and millions need jobs, it's shocking that the Administration is focused on its ultra-liberal militantly homosexualist agenda forcing the highlighting of homosexuals and homosexuality on an unwilling military. This is the equivalent of the spiritual rape of our military to satisfy the most extreme and selfish cadre of President Obama's kooky coalition."

The entire press release as a PDF file:
Download 1000 Rabbis Warn: Open Homosexuality in the Military is a Disaster and May Cause Further Natural Disasters - Christian Newswire

Posted at 09:23 AM in Haredim, Homophobia and its Discontents | Permalink

Rabbi Yehuda Levin, the spokesman of the Rabbinical Alliance of America, also called on the Pentagon and Congress to stop the "sodomization" of our military and our society.
Failed messiah was established and run in 2004 by Mr. Shmarya (Scott)Rosenberg. The site was acquired by Diversified Holdings, Feb 2016.