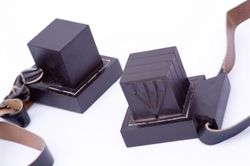 A flight from New York to Kentucky was forced to land in Philadelphia after an apparent bomb scare.
A man has been taken into custody.

Fox 29 reported the man was wearing a tefillin, a leather box worn by observant male Jews on their heads while praying.

Emergency vehicles have surrounded the plane.

Flight Diverted To Philly After Incident
BY LUKE FUNK • FoxNews

MYFOXNY.COM - A plane made an emergency landing at Philadelphia International Airport on Thursday morning after an apparent misunderstanding over a man using an Orthodox Jewish prayer device.  The plane was headed from LaGuardia Airport to Louisville.

The plane was USAir Flight 3079 run by Chautequa Air.  The plane was described as a small commuter plane that holds 50 passengers.  It's unknown how many people were on the plane.

Sources now tell Fox News that a man on a plane was using a teffilin, a leather box worn on the arm and head during certain Jewish services and he was praying on the plane.

Straps ran down from arm to his body as he was praying on the plane and a passenger became suspicious. The man was questioned by airline personnel, whio didn't get answers to satisfy them, so they diverted the plane to Philadelphia.

One person was taken away from the plane in custody and the rest of the passengers were released.

The airplane was taken to a remote part of the tarmac at Philadelphia International.  Other flights in and out of the airport were not being affected by the incident.

Orthodox man's tefillin cause plane diversion.
Failed messiah was established and run in 2004 by Mr. Shmarya (Scott)Rosenberg. The site was acquired by Diversified Holdings, Feb 2016.