Lamms Mehadrin is a "yeshivishe beef shechita" supervised by the Chicago Rabbinical Council and the Orthodox Union, and approved by KCL of Lakewood. 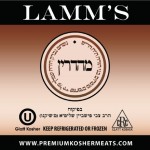 The yeshiva world now has a place in the shechita world, with the launching of Lamms Mehadrin, a yeshivishe beef shechita that is supervised by the Chicago Rabbinical Council and the Orthodox Union, and approved by the KCL of Lakewood.

It is produced in Wellington Kansas, home of AD Rosenblatt Meats, Har Nof, Heartland Kosher, and other  brands. The shochtim and bodkim learn and have
learned in BMG Lakewood, Yeshivas Telz Chicago, Yeshivas Hanegev, Yeshivas Torah Vodaas, and other prominent yeshivos.

“It is a great opportunity for the yeshiva world to have something of its own, something to which it feels a connection”, said Rabbi Sholem Fishbane, Kashrus Administrator for the Chicago Rabbinical Council and a talmid of Yeshivos  Telz Chicago and Mir Yerushalayim.

“We look forward to inviting down Roshei Chabura to have hands on shimush as they learn the sugyos of shechita and traifos”, he said. Other plans include a close connection and sensitivity to chumros and hanhagos of the yeshivishe oilom.

The label is named after Reb Psachya Lamm, z”l, the great grandfather of proprietor Yaakov Rosenblatt, himself a talmid of RJJ Edison, South Fallsburg and BMG Lakewood. Reb Psachya was the first Glatt Kosher butcher in America and had a respected butcher store in Williamsburg for many years.

Many people remember the success he had in standing up to the Unions, which were a major impediment to high standards of Kashrus in the early days of shechita in America. Rosenblatt said the program is named in tribute to him.

The production is personally overseen by Rav Zvi Fishbane shlita of Chicago. Rav Fishbane is  a well known talmid chachom with over thirty years experience in the shechita world and mechaber  sefer Hameilitz Beinosom on Targum Yonasan Ben Uziel.

Posted at 09:46 AM in Haredim, Kosher Business?, Kosher Scandal | Permalink

Lamms Mehadrin is a "yeshivishe beef shechita" supervised by the Chicago Rabbinical Council and the Orthodox Union, and approved by KCL of Lakewood.
Failed messiah was established and run in 2004 by Mr. Shmarya (Scott)Rosenberg. The site was acquired by Diversified Holdings, Feb 2016.