"We must vilify these sites and purge them from our midst," said the haredi rabbis. 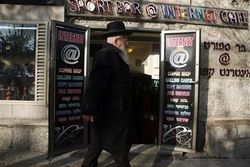 JERUSALEM – Prominent ultra-Orthodox Israeli rabbis are targeting a new foe in the decidedly impious world of the Internet: They've demanded a boycott of their community's own Web sites, accusing them of disseminating "gossip, slander ... filth and abominations."

It's the latest flashpoint in a long-simmering battle by rabbis in the profoundly insular ultra-Orthodox, or haredi, community to preserve their influence over hundreds of thousands of followers in an era when the forces of technology are growing ever more powerful.

The ultra-Orthodox portals do not contain the seamy material that traditionally has been the main target of rabbinical ire. But the sites, which publish articles on politics, economics, health and religion, do offer freewheeling discussions with irreverent and unmonitored reader responses — including direct criticism of rabbis' authority.

A reader responding to a recent report on alleged bribery in an ultra-Orthodox school in the Tel Aviv area posted a photograph of the "hear no evil, see no evil, speak no evil" monkeys, likening them to municipal, school board and rabbinical officials.

Another reader, commenting on a legal dispute that made its way from a religious court to a secular court, predicted that the "harediban" — a play on the word "Taliban" — would lose their grip on the community.

The anonymous comments are an injection of openness in the intensely cloistered world of Israel's estimated 650,000 haredim, Hebrew for "God fearing." The haredim live in isolated enclaves across Israel and study in closed school systems. These communities, easily recognized by their bearded men in long black coats and brimmed hats, have minimal contact with the rest of the world.

Ultra-Orthodox rabbis have labored hard to throw up walls between their community and the outside world, and technology has long been a battleground.

Television was an early target and remains off-limits in many ultra-Orthodox homes. Cellular phones were another point of contention, with rabbis ordering the use of "kosher" filters out of fear the phones would be used to access sex sites or other objectionable material.

Haredi rabbis have been railing against the dangers of the Internet for a decade. In one infamous incident, the family of Israel's Sephardic chief rabbi, Shlomo Amar, had a 17-year-old boy kidnapped and beaten at knifepoint after he became acquainted with the rabbi's daughter through an Internet chat room and later met her unchaperoned — an ultra-Orthodox taboo. Amar was not charged in the case.

The very existence of haredi Web sites gives the Internet a cloak of legitimacy in the ultra-Orthodox world, said Menachem Friedman, an expert on Jewish religious society in Israel.

"If there are haredi Web sites, then it means the Internet is kosher," with all the openness to the outside world that legitimacy would imply, he said.

The Web sites "set the agenda," he said. "They are threatening the old elite."

The rabbis haven't been able to keep out the Web entirely. They have offered a dispensation to businesspeople and others who use it to make a living. And filters devised over the years have permitted the ultra-Orthodox to strictly screen content, allowing the Internet to flourish in their midst.

Now, the rabbis are trying to plaster the cracks in the haredi world's self-imposed walls.

In a letter published recently in ultra-Orthodox newspapers, 21 top rabbis called for an Internet boycott, specifically of the haredi sites, which they said were "defaming the haredi community" and spreading slander and filth.

"We must vilify these sites and purge them from our midst," said the letter.

Even if the sites themselves aren't guilty of objectionable conduct, "they are making people use the despicable Internet, which has harmed so many Jewish souls," added the letter, which has been posted on the same haredi Web sites they wanted boycotted.

In the U.S., home to the world's second-largest Jewish community after Israel, there's been no similar boycott call, said Rabbi Avi Shafran, spokesman for the haredi Agudath Israel of America group. But he said he could identify with the rabbis' concerns.

The blogosphere "may have worthy offerings but it is saturated, too, with hatred, lies, half-truths and slander," Shafran said in an e-mail. He said when sites allow anonymous comments, "the potential for what is Jewishly wrong is magnified exponentially."

Agudath Israel of America has never maintained a Web site, Shafran said, for fear that would "send a subliminal message to people that the Web is a place they should regard as benign."

So far, the boycott calls in Israel have already claimed significant victories. At least two sites have shut down and key figures have resigned from another.

But insiders don't expect the ban to squelch Internet use.

"The Internet broke down the walls of the ghetto that the haredi world built up," said Ben Haim, the Maariv reporter.

"We must vilify these sites and purge them from our midst," said the haredi rabbis.
Failed messiah was established and run in 2004 by Mr. Shmarya (Scott)Rosenberg. The site was acquired by Diversified Holdings, Feb 2016.