« Racist Chabad Rabbi To Be Released From Police Custody | Main | Haitians Killed Because They Or Others Did Not Keep Biblical Law, Haredi Rabbi Says »

Letter from Jerusalem: New Conversion Law Is A "Joke"

It will change nothing because it cannot change anything.

The new conversion law is a joke
Coalition MKs have added a clause that effectively neutralized the law.
By SETH FARBER • Jerusalem Post 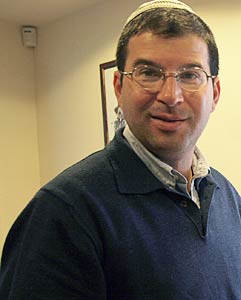 At the immigration and absorption conference in Ashdod this week, both Justice Minister Yaakov Neeman and Foreign Minister Avigdor Lieberman called for universal support for a new conversion bill - a bill which would ostensibly "take the power away" from the Conversion Authority and allow local community rabbis to perform conversions.

At first glance, their suggestion is meritorious. The Conversion Authority has been notoriously deficient in effecting conversions - to a large extent because of lack of leadership and policy. By "privatizing" conversion, the process would become much more personal and much less overwhelming. This, in turn, might alleviate a looming demographic crisis threatening the Jewish character of the State of Israel - given the more than 300,000 citizens who emigrated under the Law of Return, but do not meet the Orthodox halachic definition of Jewish.

However, the law which these ministers support is layered with populism and party interests, and ultimately, will help few potential converts.

In fact, in its original form, the bill would have allowed all community rabbis to perform conversions. Since a handful of community rabbis are considered "moderate" in their approach to conversion, the authors of the bill assumed that converts would be able to approach these rabbis and have their conversions certified nationally.

However, all that changed four months ago.

It was then that the bill came up for review in the Knesset Law Committee and almost immediately, MKs who serve in the coalition added a clause that effectively neutralized the law. The new provision mandates that community rabbis can perform conversions "if they receive an additional certification from the Chief Rabbinical Council."

IN OTHER words, the fact that a rabbi has received the authority to register marriages, supervise burials and organize kashrut in his city doesn't imply that he can effect conversions (even though he has been examined on the laws and rituals concerning this matter).

This clause is a deliberate slap in the face to the moderate city rabbis. It suggests that notwithstanding their scholarship or experience (many used to perform conversions before the Conversion Authority was established), they need further "approval." Given the constitution of the Chief Rabbinical Council, it is a given that none of the moderate city rabbis will ever be certified to convert.

Just to provide two examples, one of the members of the council is himself a city rabbi who won't register people who convert in the Conversion Authority. And another served on the rabbinical court which issued the notorious decision in 2008 by Rabbi Avraham Sherman annulling Rabbi Haim Druckman's conversions.

In short, the new conversion bill - in its present and apparently final form - is sophistry of the first order and is being promoted as an offering to the immigrant population, with no substance supporting it. In many respects, the country would be better off if the law wasn't passed and if politicians began studying the core issues and seeking genuine resolutions, rather than trying to simply pass off another bill as a solution to an essential issue threatening the Jewish fabric of Israel.

There needs to be a full review of conversion policy and strategy, and a public relations effort that will make conversion a national priority. Anything less, and we will continue spinning our wheels for another decade.

The writer is the director of ITIM: The Jewish Life Information Center (www.itim.org.il), an organization dedicated to helping Israelis and immigrants navigate Jewish life here.

Letter from Jerusalem: New Conversion Law Is A "Joke"

It will change nothing because it cannot change anything.
Failed messiah was established and run in 2004 by Mr. Shmarya (Scott)Rosenberg. The site was acquired by Diversified Holdings, Feb 2016.