« Accused Child Molester In Shul | Main | Israeli Expert: "What Happened In Haiti Will Happen In Israel" » 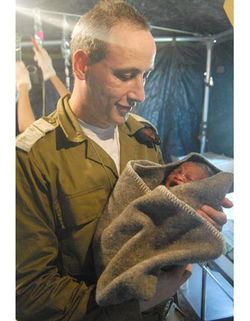 The hospital, set up by the IDF's medical corps, is still home to 15 patients who are being monitored following their operations. However, the Israeli hospital will only be receiving emergency cases during the night.

On Sunday, Israeli doctors already started bidding their patients farewell; many of these patients have no home to return to after leaving the hospital.

By Tuesday morning, the last of the patients will be released and Israel's hospital will shut down. The IDF team in Haiti is expected to arrive back in Israel on Thursday.

The IDF's hospital treated a total of 1,102 Haitians, performed 314 surgeries, and delivered 16 babies during its deployment. 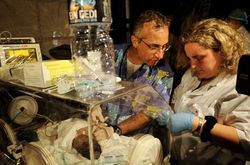 "We can sum up by saying that we had three missions: Saving lives, providing medical services, and representing the State of Israel honorably," Golan said. "I think we met all three missions admirably. Indeed, the assistance was a drop in the bucket in the face of the immense human suffering in Haiti, yet nonetheless, we are glad that we could have offered some help, considering the difficult conditions over there."

Haiti's government said Monday that the death toll in the wake of the earthquake reached roughly 150,000 people. According to the UN's official count, the death toll stands at 112,250.

Haiti's prime minister turned to donor countries Monday and asked that they offer assistance to the devastated country during what is expected to be a 10-year rehabilitation process. Haiti's government is currently looking into relocating about 400,000 people, who at this time are staying in about 400 camps outside the capital Port-au-Prince.

Meanwhile, local gangs are continuing the looting in the capital, while Haitians in more remote regions are trying to revert to their routine. Residents are slowly returning to work, and more stores are reportedly reopening in the wake of the disaster.

Ha'aretz has a more complete report: The Israel Defense Forces team in Haiti is finishing up its mission and will return home on Thursday. The decision was based on the recommendation of the Home Front Command, whose senior officers feel hey have fulfilled their role in helping the earthquake victims. In view of the large number of personnel and resources the command is deploying in Haiti and the U.S., it is believed the time has come to wrap up the mission.

Maj. Gen. Yair Golan, the head of the Home Front Command, returned to Israel last Friday after spending a few days with the Israelis in Haiti, commanded by Brig. Gen. (res.) Shalom Ben-Aryeh. The command and the IDF Medical Corps are now preparing for the next stages of their mission: closing up shop and leaving behind a large part of the equipment brought there as a final goodwill gesture to the people of Haiti.

The winding up of the mission involves assisting the members of the team in returning to normal life back home after the complex experiences they they had, as well as drawing the necessary professional conclusions from the Haiti operation.

On the professional level, the IDF learned much about running a field hospital under such difficult conditions and operating rescue teams; and about dealing with a mass disaster that thankfully Israel has never experienced. The up close experience of dealing with an earthquake and its aftermath - a number of aftershocks occurred while the Israel mission was there - increased awareness of the enormous danger of such a natural event, but the upper echelons of the Home Front Command believe the situation in Israel is very different. While the earthquake in Haiti reached a magnitude of 7 on the Richter scale, it seems the incredible destruction resulted more from the poor-quality construction there. Two similar strength earthquakes in California in recent decades resulted in only a few dozen killed in each quake.

Members of the rescue team who toured the area were surprised to discover there are almost no buildings built with reinforced concrete in Haiti. "You wander through the ruins and see no iron bars. Everything is made out of simple concrete, which turns into a brittle material in an earthquake of this magnitude. Everything collapses," said one member of the Israeli mission.

In Israel, by way of comparison, a far stricter building code was adopted in the mid-1970s, making buildings far less vulnerable to earthquakes.

The main conclusion of the Haiti mission from an Israeli perspective, said one senior officer, concerns the "awareness of the citizens and local authorities of the possibility of an earthquake. It is possible that more exercises are needed, but if you prepare properly for a missile attack on the home front, then you have 95% of the tools [needed] at your disposal for dealing with an earthquake," said the officer.

An analysis of the decision making process on sending the team once again shows that time is the critical factor. Israel moved quickly, in terms of making its decision and making the necessary preparations.

This provided effective help at a very early stage. In the case of Haiti, the rescue operations among the ruins - even though they drew huge media coverage - were downplayed. "It is very exciting to pull out survivors, but it's a drop in the bucket. We rescued or aided in the rescue of four people, while all the rescue teams from all the countries saved 132 people altogether. It seems almost 200,000 people died in the earthquake," said the senior officer.

Israel's main accomplishment was in the quick deployment of the field hospital in Haiti. "For five critical days, it was the best hospital in Port-au-Prince," said the officer. "We provided timely medical care to about 1,000 people, we conducted 300 operations and delivered 16 babies. In the past few days the Americans arrived and then you can put things in proportion and become more modest in the face of their airlift and the scope of their aid. You need to understand that those who will continue to treat the main suffering there are the Americans," he added.

For Israel, this is further proof of the importance of field hospitals; the IDF closed the last one five years ago and only reopened them as part of the lessons learned from the Second Lebanon War.

Next week the Home Front Command and the Medical Corps will hold a two-day seminar, with the help of psychologists, for those returning from Haiti to prepare them for returning to their routine.

The IDF has praised the cooperation with the Foreign Ministry and El Al during the mission to Haiti. The good public relations is seen as being of only secondary importance: "Our people went to Haiti to save lives, to provide the best medical care they can and to represent Israel. That is the proper order of priorities. They did not think constantly about the blue and white flag flying overhead," said the senior officer.

After performing 316 surgeries and delivering 16 babies, IDF field hospital in Haiti closes its doors.
Failed messiah was established and run in 2004 by Mr. Shmarya (Scott)Rosenberg. The site was acquired by Diversified Holdings, Feb 2016.