« Letter from Las Vegas: Synagogues Shouldn't Be Able To Hide Behind The 1st Amendment In Abuse Cases | Main | CNN: Only Israel Has A Fully Functioning Field Hospital In Haiti »

Percussion should be used sparingly, guitar and saxophone should not be used, and all forms of modern music are forbidden. 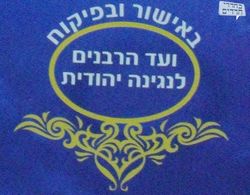 A new committee in Eretz Yisroel has been formed to provide hashgacha on Jewish music. It is not yet clear who will feel obligated to adhere to the guidelines of the new committee which will affix their seal to music that it deems appropriate Jewish music.

The committee, comprised of four individuals, will give its approbation to those music albums that they feel is appropriate for the every Jewish home and will enhance one’s connection to the Ribono Shel Olam.

It is not clear if lacking the new certification will automatically mean that a given album is not considered acceptable to the masses. However, obviously, say those in the Jewish music industry, this initiative needs the majority of people to honor it for it to have any noticeable effect. Whether this will happen is very uncertain.

Along with the announcement of the new music hashgacha, the committee released a list, in Hebrew and in English, of various guidelines regarding the playing of music, which instruments are permitted, and more. For example, the guidelines state that when singing a tune to words of a holy source, it should be sung carefully and with respect. The guidelines also discuss misbalances between rhythm and melody, and states that instrumentation should suit the meaning of the words of a song. 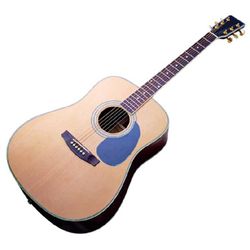 Other information in the guidelines include that percussion should be used sparingly, guitar and saxophone should not be used at all, and all forms of modern music, including pop, reggae, disco and rap, are forbidden.

The English guidelines can be seen by clicking here and here, and then click on the image to magnify it.

Note that this not a ban, but rather simply a hashgacha.

According to sources in Israel, there is a movement to counter this new effort, with organizers pushing for consumers not to purchase any albums that possess the new hashgacha.

This appears to a rehashed ban attempt from the same rabbi, Efraim Luft behind earlier attempted bans.

Rabbi Luft relied heavily on the KKK publication The Southerner for his 'proof' of the corrupting nature of pop, rock and jazz music, and Yated Ne'eman, the haredi 'newspaper,' picked up Luft's ravings and used them approvingly. Here's an example:

"[Rock music] will erode the entire moral structure of man . . . of spirituality in holy marriage . . . all the white man has built through his devotion to God." (The Southerner, March 1956, p.6)

And here's a sample of Yated's line of reasoning:

In earlier times, most of the non-Jewish music was respectable and could be used for singing with holy words. Even simple peasant music was clean and fit for playing at Jewish simchas. But in modern times, with the development of recording and radio and the entertainment business that catered to the masses, a new purpose was found for music -- to arouse the yetzer hora.

Ha'aretz profiled Rabbi Luft in 2008, and the Jerusalem Post covered him, as well:

"We might be able to adopt Bach or Beethoven, music with class, but not goyishe African music and beats.…

"There are certain types of music, such as rap and reggae, that are disgusting and have no place in our community."…

Here are Matzav's scans of the 'new' rehashed guidelines: 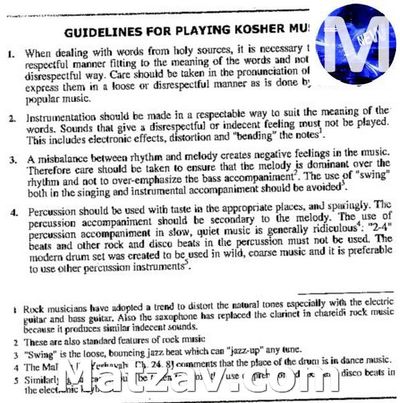 Percussion should be used sparingly, guitar and saxophone should not be used, and all forms of modern music are forbidden.
Failed messiah was established and run in 2004 by Mr. Shmarya (Scott)Rosenberg. The site was acquired by Diversified Holdings, Feb 2016.