« Tropper Scandal: The Silence of the Rabbis | Main | Rabbi Questioned Over Mosque Attack »

NEWARK, N.J. -- The most eagerly awaited video release in New Jersey won't be showing in theaters, but will screen exclusively at a Newark federal courthouse, starting this week. 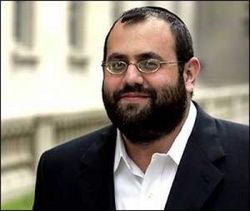 With the first trial in New Jersey's largest ever corruption probe set to begin, the public finally will get to see Solomon Dwek in action: a government cooperator who secretly recorded hours of meetings at restaurants, diners and parking lots over two years, showing religious leaders, politicians and municipal employees in various states of alleged wrongdoing.

It has been six months since the mammoth corruption bust resulted in 44 arrests. The dramatic July 23 takedown featured early morning raids from synagogues to city halls and allegations of bribes distributed in cash-stuffed cereal boxes. Prosecutors say the money laundering operations were so large they were referred to as laundromats.

It also produced one of the more memorable perp walks in New Jersey's history: Elderly rabbis in long black coats, sweat-suited municipal employees and assorted bleary-eyed elected officials paraded in handcuffs off a fleet of buses for processing at FBI headquarters.

Among the defendants: Three mayors, two state assemblymen and other public officials charged with corruption, prominent rabbis from Brooklyn and Deal, N.J. charged with money laundering, and in one case, a man charged with brokering the sale of a human kidney.

Ten have pleaded guilty, and the rest are awaiting trial or in plea negotiations.

But the man everyone wants to hear from is Dwek, the cooperating witness that the U.S. government is hanging almost its entire case on. Prosecutors are hoping a jury will believe a man who pleaded guilty to a $23 million bank fraud and faces additional lawsuits for an alleged real estate Ponzi scheme.

Dwek, the son of a prominent rabbi, was a real estate speculator before his 2006 arrest for bank fraud. As part of a plea agreement, he agreed to help the government by secretly taping dozens of meetings in which he sought to launder money from bankruptcy proceedings through Jewish charitable organizations in the tight-knit Orthodox enclave he grew up in. He also posed as a real estate developer seeking influence with public officials.

Lawyers on both sides will be watching the first trial closely. Hints of how the defense plans to proceed were evident last week during pretrial motions, when Beldini's attorney, Brian Neary, characterized Dwek as a government-sponsored lawbreaker who helped create the crimes with which others now are charged.

"Dwek doesn't go out and report on crime that's happening; he's giving $5,000 or $10,000 to people while he hides $50 million that he robbed from people," Neary said. "And the government invests in his methodology, the same methodology he used to kite checks at banks and to take money from friends, family and members of his own community."

Prosecutors will seek to keep the focus on Beldini and alleged coconspirator Edward Cheatam, expected to testify against her, and portray them as eager to take Dwek's money and convert it into campaign donations for Jersey City Mayor Jerramiah Healy, who has not been charged.

The July arrests furthered perceptions of New Jersey as so corrupt that Dwek merely had to cast a fishing line, baited with bribe money, in any direction to touch off a feeding frenzy.

Privately, several defense attorneys involved in the case have charged that the investigation and its seemingly made-for-TV arrests were politically motivated, as they largely targeted Democratic officials and were overseen by former U.S. Attorney Christopher Christie, a Republican who last week was sworn in as New Jersey's 55th governor.

Jurors may not hear that argument, however; last week U.S. District Judge Jose L. Linares sided with the government and cautioned Neary against using it during Beldini's trial.

The scams produced one of the more memorable perp walks in New Jersey's history: Elderly rabbis in long black coats, sweat-suited municipal employees and assorted bleary-eyed elected officials paraded in handcuffs.
Failed messiah was established and run in 2004 by Mr. Shmarya (Scott)Rosenberg. The site was acquired by Diversified Holdings, Feb 2016.