"He eats on the fasts Chazal established…I can attest that his views regarding belief in the oneness of God contains heresy and apikorsus…His ways are closely reminiscent of the cult of Shabtai Tzvi, and where it may lead, no one can know." 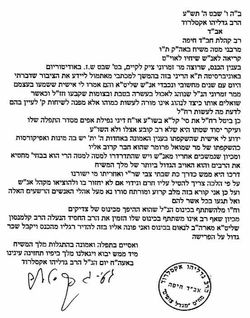 HaRav Gedaliya Axelrod, a prominent Chabad figure in Eretz Yisroel and the rov of the Chabad kehilloh in Haifa, wrote a scathing letter against [Rabbi] Zimroni Tzik, who heads the Chabad House in Bat Yam.

Addressed as an open letter to the kehilloh and dated Thursday, 6 Shevat, the text of the letter reads as follows:

In the matter of the keness Mr. Zimroni Tzik would like to hold on [Sunday] 9 Shevat in the auditorium at Tel Aviv University, following my letter of yesterday I hereby notify the congregation that I spoke today with two prominent Chabad figures shlita, and they told me they personally heard Mr. Zimroni say he eats on Asoroh Beteves and the other fasts Chazal established, and when people ask how they should conduct themselves he does not instruct them to follow his example, but refers them the holy sichos and tells them to examine them in order to determine what to do, Rachmono litzlan.

Likewise he has done away with Simon 131 in Orech Chaim, Rachmono litzlan, removing Nefilas Apoyim from his tefilloh. In general, he holds that neither a rov nor the Shulchon Oruch determines his conduct.

I can attest that his hashkofoh regarding emunoh in the Oneness of Hashem Yisborach contains heresy and apikorsus, like that of his close friend, Mr. Shmuel Frummer.

Since loyal Chabad members are influenced by him and some have fallen into severe decline as a result, he is considered ‘machti es harabbim’ and is the greatest enemy of Melech Hamoshiach.

His ways are closely reminiscent of the cult of Shabsai Tzvi, sheim reshoim yirakev, and where it may lead, no one can know.

According to halochoh, he should be excommunicated – cherem and niddui – if he does not repent, and he must be removed from our community. As such, with a torn and burning heart I hereby issue a call to carefully avoid these evildoers.

Under no circumstances should one attend the abovementioned keness, which is the exact opposite of gatherings of tzaddikim.

Because not a single rabbi is participating in his event, he has invited the illustrious Rav Kalmanson shlita from the US to speak at the event, and I hereby urge him to avoid the event, and he will receive great reward for doing so.

What I think we have here are two separate models for schismatic groups.

The first closely parallels the early Jerusalem Church, which maintained Jewish laws and customs while it added on belief in Jesus as the messiah.
The second closely parallels Shabbatai Tzvi's movement, but with the divinity of the movement's late leader added in, almost a combination of Pauline Christianity and Sabbateanism.
In this case, a leader of the first has excommunicated the leader of the second.

"He eats on the fasts Chazal established…I can attest that his views regarding belief in the oneness of God contains heresy and apikorsus…His ways are closely reminiscent of the cult of Shabtai Tzvi, and where it may lead, no one can know."
Failed messiah was established and run in 2004 by Mr. Shmarya (Scott)Rosenberg. The site was acquired by Diversified Holdings, Feb 2016.