Rabbis "make up new severities on Shabbat and kashrut matters everyday but this issue, the gravest of all and one that isn't permitted by halacha, is taboo to them."

'Financial crisis drives haredi women to seek abortions'
Chairman of foundation for prevention of abortions Rabbi Schussheim welcomes chief rabbis' campaign against phenomenon, criticizes religious leaders who avoid addressing grave issue. Over last year and a half there has been substantial increase in number of individuals seeking abortions, including by haredim, he says
Kobi Nahshoni • Ynet

"Since the beginning of the financial crisis there has been an increase in the number of women opting for abortions, including religious and haredi women who can't bear the costs of raising another child," said Rabbi Dr. Eliyahu Schussheim, chairman of the Efrat foundation for the prevention of abortions. 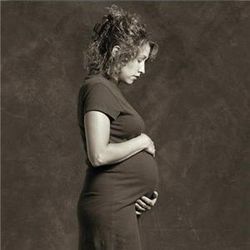 Shosheim made the statements following the announcement of Chief Rabbi Yona Metzger and Chief Sephardic Rabbi Shlomo Amar to fight the phenomenon, which he commended.

However, he leveled criticism at other rabbis, who according to him "make up new severities on Shabbat and kashrut matters everyday but this issue, the gravest of all and one that isn't permitted by halacha, is taboo to them."

The rabbi told Ynet, "Over the last year and a half year we have been approached by more and more women – mostly for financial reasons. In many cases it turns out the husbands are behind them and are forcing the women to terminate their pregnancies. We can see that the women inside them do not wish it at all."

According to him during normal financial times such approaches were few, but recently every third or fourth case is of this nature.

"It also applies to the religious and even the haredi public – men who come with beards and women who are covered up," Shosheim added. "Only a week ago a yeshiva student approached me and said that should we not provide him with support his wife will terminate the pregnancy. I was utterly shocked."

In this case the foundation chairman decided not to grant the demand since he felt the person was using the organization to receive financial support and wasn't actually considering an abortion. "We run very comprehensive checks using social workers, volunteers and requiring income reports," he stressed. "In any case the aid is given after the birth and not during the pregnancy."

Rabbi Schussheim has been active for 33 years in dissuading women from getting abortions and according to him he is responsible for the birth of some 40,000 babies – 4,013 of them in the last year. He claims to have prevented the abortion of 98% of women who approached him.

Leaving moral aspect out
The rabbi stressed that his organization is fully transparent and provides women with all relevant medical information without bias. "We don't decide for anyone, but only promise them that they won't be sorry in choosing to the have the baby," he explained and added, "We also send them to whomever recommended to terminate the pregnancy to check whether it could be assured."

Schussheim further noted that he was only addressing the matter of the effect of the act, and not the halachic, moral, legal or philosophic side of things.

"One can suffer mental and emotional disability for the rest of their lives, the cost of which is heavier than that of financial distress. Many turn to us after the abortion and relate the suffering they have endured. They are sorry they succumbed to a husband who threatened to divorce or leave them."

To avoid such cases the foundation head turns to the husbands and explains that they cannot take responsibility for such a difficult process their wives would have to undergo. When faced with a religious or haredi couple he at times approaches the family rabbi to try and change the decision.

The Efrat foundation will hold its annual fundraiser event next week and Rabbi Schussheim has asked community rabbis to discuss the matter of abortions with the public.

Rabbis "make up new severities on Shabbat and kashrut matters everyday but this issue, the gravest of all and one that isn't permitted by halacha, is taboo to them."
Failed messiah was established and run in 2004 by Mr. Shmarya (Scott)Rosenberg. The site was acquired by Diversified Holdings, Feb 2016.