The yeshiva and its rabbi are behind the "price tag" policy under which settlers commit terror attacks against Palestinians in retaliation for the Israeli government's construction freeze in West Bank settlements. 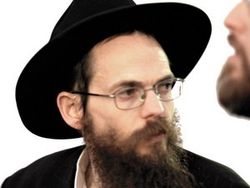 The Shin Bet security service on Tuesday arrested the head of a West Bank religious seminary for his alleged involvement in the torching of a Palestinian mosque in the village of Yasuf last month.

The suspect, Rabbi Itzik Shapira, is one of the heads of the "Od Yosef Chai" yeshiva in the West Bank settlement of Yitzhar. He was initially questioned by West Bank police, though he was later transferred into Shin Bet custody in Petah Tikva after he refused to answer questions related to the arson.

The yeshiva is behind the "price tag" policy whereby settlers have vowed to instigate actions against Palestinians in retaliation for the government's enforcement of a construction freeze in West Bank settlements.

A number of the yeshiva's administrators have published commentaries supporting this policy. Last week, the Shin Bet arrested four others linked with the arson, two of whose remand was extended by two days on Monday afternoon.

Both suspects denied the allegations against them, and were supported during the hearing by friends who shouted "god is king," and "everyone is silent."

Three more suspects were arrested in connection with the torching, two of whom are minors.

"The torching of the mosque in Yasuf is a despicable crime, and the settlers are behaving with brutality," said Abbas, who called the act a violation of religious freedom.

"The settlers' unruly behavior must be stopped," Abbas added after a meeting with United Arab List-Ta'al chairman Ahmed Tibi in Amman.

Defense Minister Ehud Barak, also condemned the act as a bid to thwart the peace process with the Palestinians.

"This is an extremist act geared toward harming the government's efforts to advance the political process for the sake of Israel's future," Barak said.

Rabbi Shapira is a student of Rabbi Yitzchak Ginsburgh. Both are Chabad hasidim, although neither is officially an employee of the movement. Similarly, Od Yosef Chai is not an official Chabad yeshiva.

Rabbi Shapira's theology is very similar to the theology of noted Chabad rabbi Manis Friedman, who publicly called (and then retracted that call) for killing Palestinian civilians, including women and children, last year.

The yeshiva and its rabbi are behind the "price tag" policy under which settlers commit terror attacks against Palestinians in retaliation for the Israeli government's construction freeze in West Bank settlements.
Failed messiah was established and run in 2004 by Mr. Shmarya (Scott)Rosenberg. The site was acquired by Diversified Holdings, Feb 2016.