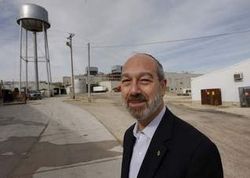 The new owner of Postville’s kosher meatpacking plant announced Friday that he intends to hire 150 workers as he expands the plant’s poultry production and restarts its beef line.

Agri Star Meat and Poultry is expanding its turkey processing, which will mean adding a second shift to its poultry line, the company said in a press release. It also plans to restart the plant’s beef line in a few weeks.

The new owners bought the plant out of bankruptcy last fall. The plant, then known as Agriprocessors, used to be the Postville area’s dominant employer, but the company collapsed in the wake of a huge immigration raid in May 2008.

The plant, which once employed close to 1,000 workers, now has more than 400, a spokesman said. The new owners say they use strict immigration checks to avoid the previous problems. The additional 150 jobs will pay about $8.50 an hour to start, then about $9.50 to $12.50 after a probationary period.

Agriprocessors used to be the largest U.S. supplier of kosher meat, and the new owners are trying to regain market share.

“There has been a tremendous void in the kosher food market. We are excited to bring high quality kosher turkey and beef items to our customers while at the same time helping boost the economy of Postville and all of northeast Iowa,” Chief Executive Officer Hershey Friedman said in a statement.

Iowa economic development officials announced in November that they were granting $600,000 plus tax breaks to the new company to help modernize the plant.

Former Agriprocessors plant expands production but beef line not yet open.
Failed messiah was established and run in 2004 by Mr. Shmarya (Scott)Rosenberg. The site was acquired by Diversified Holdings, Feb 2016.