I've been exchanging emails and phone calls since last week with Robert Frank, a mashgiach (kosher supervisor) for five years at Montefiore Medical Center, 1825 Eastchester Road in the Bronx,N.Y.
Montefiore is affiliated with Yeshiva University and serves as YU's teaching hospital for its Albert Einstein College of Medicine.
Robert Frank alleges non-kosher food is regularly brought into the hospital's kosher kitchen, and is served to patients and hospital staff, including YU med students.
Frank has videos of the non-kosher food in the kitchen. I saw one showing a case of non-kosher chicken broth and another of a case of an unsupervised canned tomato product (which is far more problematic due to processing issues than other unsupervised vegetables). Frank also told me about non-kosher cheese used to make pizza and non-kosher meat tomato sauce used for the same purpose.
He also says milk and meat cookware and utensils are regularly mixed up, and the facility had only one working dishwasher for almost a year, meaning meat and milk dishes, pots and utensils were all washed in it.
And then he spoke about the storage area used during Passover. In previous years, Frank said, the room was padlocked and only a mashgiach could open it. This year the room was left open and untrained staff went in and out at will. Non-kosher-for-Passover food was served to patients, and it was served to YU med students and doctors, as well.
According to Frank, he has spent years trying to get the OU and the hospital to fix these problems, to no avail.
Instead, the hospital has retaliated against Frank, issuing disciplinary letters and assigning him tasks like moving heavy boxes – tasks Frank cannot due because he is partially disabled due to a back injury.
Frank also complains mashgichim are taken away from doing kosher-related tasks and made to do other things, from serve soup on the cafeteria line, to putting placemats on hundreds of trays, to running food to other locations in the hospital. And it might be that Frank gets a disproportionate number of these assignments.
Frank also says the hospital stops him from using his break time to pray. He begins work at 4:00 am and needs to pray shacharit at work. His supervisors try to delay him so his break time is very close to sof z'man tefilla.
Rabbi Menachem Genack, head of OU Kosher, told me today that the OU spoke to the other mashgichim and that they are "satisfied" with the situation there. He also said that these other mashgichim were able to handle the job, implying Frank, perhaps due to his disability, is not.

One of the problems with this type of kosher supervision is that the mashgichim work for the hospital, not for the kosher supervision agency. Sometimes this is because the mashgichim hold other jobs at the facility – cook, purchasing agent, etc. – and are paid by the facility for that work and, perhaps, a bit more for their rabbi duties.
But Frank's case seems to be different.
The OU only pays its mashgichim in this facility about $18 per hour. That's $18, with no benefits, because the mashgichim are paid as independent contractors. This is, I'm told, very common for the OU and other kosher supervision agencies. It is also arguably immoral and against halakha.
Frank and others like him opted to be hospital employees. That got them benefits, employee status, and a union. But they work at the will of their employer – the hospital – and not at the will of the OU, and that means when conflicts over kosher supervision arise, the hospital seems to treat them like internal employment issues rather than kosher issues.
For its part, the OU  – which seems to be negligent with regard to its treatment of mashgichim to begin with – tends to try to smooth these issues over. But the easiest bump to smooth is most always the weakest, and the weakest are the mashgichim, who are often people desperate for work. And it is easy to cow a desperate man trying to feed his family.
I've seen this dynamic at work up close, and it isn't pretty. Once a mashgiach realizes the OU won't back him up, he's effectively left out to dry. If he doesn't have a union to support him, he'll be forced out or fired.
How does the OU justify this?
To the OU and other kosher supervision agencies, it's all a matter of degree. Mistakes happen in all kitchens and mistakes can be overlooked. Some pots can be kashered, perhaps an employee spoken to, and life goes on. But when too many mistakes occur, that laissez faire attitude can't continue. The system may need to be totally revamped; certain kitchen employees may need to be terminated.
But this puts the OU in the middle of a he-said-she-said situation, with the mashgiach saying one thing, the kitchen management another, and often other mashgichim something else entirely.
Because the system does not have built in checks, and because the complaining mashgiach is standing alone, it is the complaining mashgiach who is often the loser. It is almost as if the one who sees more is punished for seeing, rather than the problems being fixed or offending staff being fired.
Robert Frank says he sent an email to YU President Richard Joel alerting him to this situation. Joel, Frank says, never replied.
Richard Joel is out of his office until Thursday and was unavailable for comment.
Whether Frank's complaints are justified or not, they have exposed another abuse common throughout the kosher industry – the mistreatment of mashgichim by kosher supervision agencies.
Having mashgichim paid so poorly (for New York City) and denied basic benefits common to all employees is a scandal.
It is also another indication that your kosher food, no matter how technically kosher it may be, isn't really very kosher at all.
I was unable to reach Montefiore's Director of Food Services in time for this post.
UPDATE 6:00 pm CST: 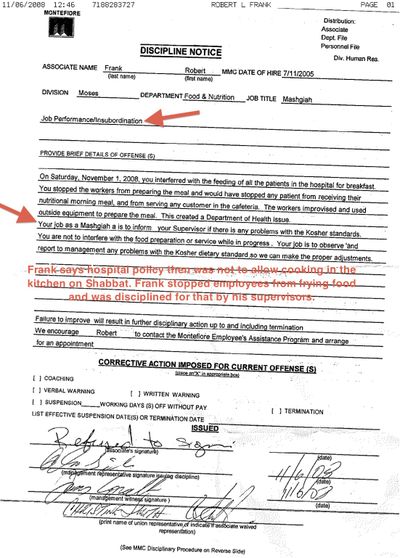 Please click to enlarge.
Robert (Rubin) Frank sent me some of the disciplinary letters he has received.
They include being written up for stopping employees from cooking hot food on Shabbat morning in the kitchen (please see above document), even though the hospital's policy then, he claims, was to forbid such cooking, and being written up for excessive absence – even though one series of absences were for a medical procedure and the hospital was given, he says, two weeks notice, and the other set was for a viral infection and he had a doctor's note.
Frank also notes that most complaints are written up after he finds non-kosher food and reports it.
You can see that Frank seems to be in a no-win situation. If he finds non-kosher food in the kitchen, he's penalized and if he doesn't find it, he's penalized.
Here are all the letters, along with correspondence between the OU and Frank, and between Frank's attorney and the OU, combined in one PDF file:
Download Robert Frank Disciplinary Letters, Letters From and To OU, etc
UPDATE 12-2-09 1:55 PM – The OU and Montefiore Hospital retaliate against Robert Frank.
UPDATE 12-4-09 5:17 AM – "100 + Roaches."
UPDATE 12-4-09 9:25 AM – Anatomy of an Incident.
UPDATE 12-4-09 2:25 PM – Mashgiach To Be Fired.